Residents of Haida Gwaii may want to brace for a summer invasion, as the North Pacific archipelago 201 kilometres to the west of Prince Rupert gains yet another accolade, this one from the release  of The Lonely Planet Guide for 2018.

The latest guide had its first print run in October and Haida Gwaii has been tagged as a destination rich in scenic vistas and one that offers up the visitor a chance to explore the rich Haida culture.

Among some of the Top Choice Attraction Recommendations are: 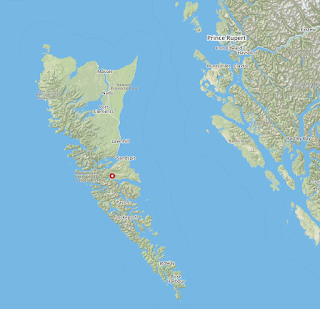 The Lonley Planet's full online overview of Haida Gwaii can be found here.

With yet more attention for the Islands, the North Coast could seem some side benefits should the exploration route take people along the Highway 16 corridor to Prince Rupert.

As Haida Gwaii continues to collect its press clippings, the need to rest, refuel and catch a ferry could bring a boost to the Northwest regional tourism industry this summer.

With area hotels, restaurants and merchants hopefully to gain some of the pass through traffic as the Lonely Planet followers chart their course to the Islands.

Last summer the Lonely Planet provided for a snapshot of what Prince Rupert has to offer travellers, you can review that feature here.

For more notes on the North Coast Tourism industry see our archive page here.
Posted by . at 8:50 AM