The next labour day gatherings for Canada's workers may make for a bit of an uncomfortable family reunion, that after a notice to Members was released on Wednesday by the Canadian Labour Union's leadership.

In a two page announcement, the national labour organization outlined why it had taken steps to dis-affiliate from the Canadian Labour Congress, the national body that serves as the umbrella group for all labour unions in the nation.

The main thrust of the decision to break away from the CLC is related to what Unifor calls a lack of action by the Canadian Labour Congress to address aggressive and undemocratic tactics shown by American based unions towards workers in Canadian Locals.

Unifor leadership outlined for its members that it was the reluctance of the CLC to address issues to allow for the democratic process for workers to change unions that was at the heart of the dispute, as well Unifor leadership called out the umbrella group for its inability to to ensure that  U.S. based unions hold legitimate elections of Canadian leadership.

After a meeting of the National Executive Board for Unifor on Thursday, the union announced it had reached a unanimous decision  to discontinue their affiliation and membership in the CLC.

As part of their announcement, Unfior provided a copy of their letter to CLC  President Hassan Yusuff, which outlined further the reasons that led to their decision to make the split. (click to enlarge) 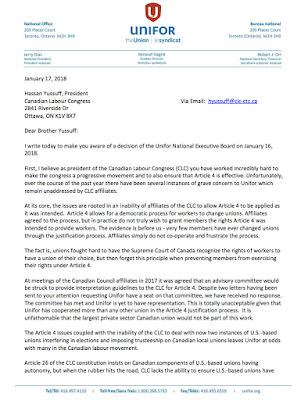 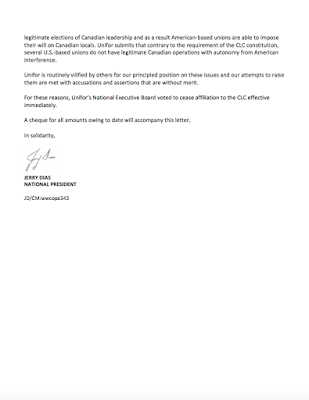 For his part, Canadian Labour Council President Hassan Yussuff issued a statement that provided for the CLC view of the Unifor action, calling the news deeply disappointing, the short statement from the CLC included a commitment to resolve the issue and reunite the labour movement in Canada.

As well, the CLC president vowed to not let the current situation become a distraction when it comes to the ongoing work on labour issues that the CLC is currently working on.

CUPE, the nations largest public service union also issued a statement that encouraged the Unifor leadership to sit down with CLC representatives to work out their differences for the good of the labour movement.

Unifor is Canada's largest private sector union, and has more than 315,000 members across the nation working in every major sector of the Canadian economy.

Locally, the largest membership for Unifor in the region is found from the North Coast fishing sector through the UFAWU-Unifor membership.

There so far has been no information provided, from the local office related to the national announcement from yesterday, nor has there been any indication as to what the split may mean on the local labour scene.

Some more background on the dramatic developments from the national labour scene can be found below.

For more items of note related to labour issues on the North Coast see our archive page.

For further notes on the national aspect of the labour split, follow our notes from our political blog D'Arcy McGee.
Posted by . at 8:59 AM