City Council kicks off its year of reduced Sessions, with a rather short debut for 2018 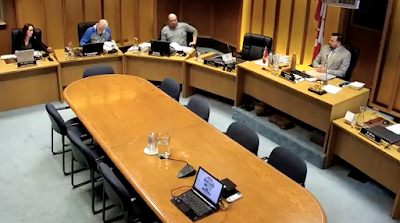 At eighteen minutes from start to finish, Prince Rupert City Council launched their reduced workload of the 2018 Council year with one of the shortest Regular Council sessions in recent years.

Five of Six Council members (Councillor Kinney was absent on the night) and Mayor Lee Brain made quick work of the two items on their Agenda for the night and offered up few comments as the first session for 2018 wrapped up before the clock had hit twenty minutes.

It's a mark which rivals their work on September of 11th of last year when they knocked off their to do list in just twenty minutes. For those looking for a meeting to meeting comparison of Council's work, a review of all Council sessions can be found on our archive page here.

Council also hosted a Closed session earlier in the day, though there is no indication through the City's information flow as to how long that closed door meeting lasted.

As we noted in our Preview of the Monday session, this year finds City Council having adopted a reduced schedule for 2018, eliminating all of the public sessions in September and October in the lead up to the November municipal election.

And despite what clearly was a perfect opportunity on a light workload night, none of the City Council members chose to offer up any explanation, or comment related to the decision. A shift in the municipal Council calendar that was released only by way of a public notice in the paper in mid December.

That lack of opinion and commentary on such areas of governance would seem to run counter to a New Year's resolution piece from one of the City's Councillors from earlier this month.

On January 2nd, Councillor Blair Mirau, who has often spoken to the issue of the need for City Council to deliver more information to the public offered up a number of themes for City Council to pursue for 2018, with Mr. Mirau delivering  his thoughts through a Facebook post to his social media stream which focuses on municipal issues.

Key to that theme was one resolution to work towards better communication between Council and the public:

II. Enhance council communications. Despite being tabled in 2017, I will again speak in favour of passing the new city communications policy because I believe it is extremely important for council to improve disclosure and reporting for decisions made in-camera.

One might think that eliminating three consecutive Regular Public Council Sessions through September and October might make for a topic that would fit into that particular resolution of improved disclosure for the year ahead.

But alas, on Monday, neither Councillor Mirau, nor any of the other members of Council in attendance on the night chose to put that goal of more disclosure and better communication with the public into visible action.

You can review more on Council's efforts from Monday through our Timeline feature here.

Other notes related to Prince Rupert City Council can be found on our Council Discussion archive.