Wednesday morning saw yet another incident in the city's downtown core where a pedestrian was struck by vehicle, the most recent occurrence taking place at the crosswalk at Fourth Street/Fulton and Second Avenue West, located but a few steps from Prince Rupert City Hall.

Accounts from the site of the incident note that a 71 year old woman was struck by a cab as she was walking with the right of way across the busy arterial road in the heart of the downtown core.

As a result of the incident the driver of the cab has reportedly been issued a violation ticket, the woman was attended to at the scene by members of the Prince Rupert Fire/Rescue Service and the BC Ambulance service, prior to their arrival bystanders that witnessed the incident offered assistance as they awaited Emergency Services.

Wednesday's incident marks just the latest case file or near misses for the RCMP, both in the downtown area and elsewhere and brings home a message that  has been delivered by residents for a number of months now for the city and the province to bring more attention towards road safety in the community.

That was a theme that Mayor Lee Brain addressed on Monday evening, speaking at the end of the City Council session on the night, the Mayor outlined that city staff had recently met with representatives of the Ministry of Transportation to review some of the safety issues along the Highway through the city.

Mayor Brain noted that a follow up meeting with Council is anticipated to take place sometime in the near future and clearly that gathering can't come soon enough, as nervous residents cross the city streets with no shortage of trepidation.

The Mayor's brief comments on the issue can be reviewed from the City's Video Archive from Monday's meeting starting at the seventeen minute mark.

A local group, Complete Streets for Prince Rupert, that has been raising awareness of road safety and making for more complete streets, their most recent work on that theme has seen the group compiling a list of those intersections that raise the most concern for local residents.

The current project is designed to identify problem areas in the city, you can learn more about that initiative here.

We outlined some of their work in 2017, more on those initiatives can be found below: 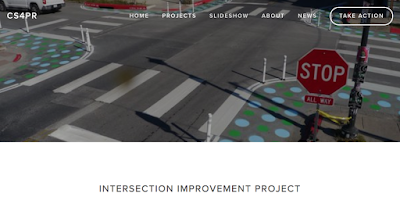 The issue of road safety is not unique to Prince Rupert, our neighbours to the north in Ketchikan appear to be suffering many of the same issues as we have on the North Coast, the Ketchikan Borough Assembly has been addressing the issue this month as well, recently hosting the State of Alaska Transportation Department to provide an update on what measures they might be able to take to reduce the risks for pedestrians.

You can review some of those notes from the Southeast Alaska city below:

More background on some of the past incidents or notes on road safety in Prince Rupert can be found below.


A wider review of road safety issues in Prince Rupert can be found from our Council Discussion Archives.
Posted by . at 9:19 AM