The question of the day for the CBC program Cross Country Checkup was pretty straightforward on Sunday, with host Duncan McCue opening up his two hour program from Prince Rupert with ...

Is it time for Canada to transfer resource rights back to First Nations?

The answer from the crowd inside the North Coast Convention Centre for the broadcast and those calling in from across Canada, was that of a declaration of a strong positive response to the concept.

However, as Mr. McCue would quickly learn from the two hour broadcast from the North Coast, how each First Nation of the region plans to approach development of resources has many different layers and some significant differences between the area's nations.

Representatives from a number of First Nation communities in the Northwest participated in the program, including Lax Kw'alaams Mayor John Helin, who was called on a number of times to outline how his community was approaching the themes of development and governance.


Also delivering an extended overview of how First Nations view the issue of resource development and relations with other levels of government was Eva Clayton, the President of the Nisga'a Lisims government.

Ms. Clayton provided for a wide ranging review of how the Nisga'a are taking on the challenges ahead of them, all of which are being managed through the Nisga'a Treaty one of the few negotiated treaties that First Nations in British Columbia have completed with the provincial and federal governments.

Crystal Smith, the Chief Councillor of the Haisla Nation participated in the program by phone, providing some focus to the prospect of resource development, with her community set to bring LNG terminal development to the North Coast, one of the few projects that still have momentum from the recent burst of LNG activity in the Northwest.

Also in attendance at the North Coast Convention Centre was Skeena MLA Ellis Ross, who has been bringing the issues of resource development and economic development for First Nations communities to the Legislature as opposition critic on a regular basis.

He was asked to outline what First Nations need most to do to get into the game of benefiting from development.

Mr. Ross recounted how the larger issue at the moment is the existing conditions for Aboriginals in British Columbia and Canada, turning to his time as Chief Councillor for the Haisla and how his overriding goal was to make conditions better for his community and to create employment opportunities that would bring to the community many of those Haisla members that had left home.

When it comes to developing resources in their territory, he observed that the key for First Nations is to partner with those with knowledge of the industry, to have them come to their communities to understand what the First Nations want and to be respectful of their goals and ambitions.

Prince Rupert's Blair Mirau, through  his position as Economic Development Officer with the Gitmaxmak'ay Society provided a brief overview of some of the business initiatives that the Nisga'a organization in Prince Rupert have put in place, using the revenues from their investments to put towards the delivery of Nisga'a social and education programs in the community.

A number of local residents also participated through questions from the audience, reflecting a number of issues of importance for Tsimshian, Nisga'a, Haisla and Haida members that were in the convention centre hall.

Ongoing disputes related to forestry and other resources on Haida Gwaii claimed some of the conversation on the day, used as an example as to some of the areas where concerns continue and how the rights of First Nations can at times not be considered.

Another theme that dominated the discussions was the opposition of both the Lax Kw'alaam Band and the Nisga'a Lisims Government to the installation of an oil tanker moratorium on the North Coast.

The actual topic of any potential oil terminal development for the region did not make for much of the discussion related to the concerns of both First Nation governments, but instead it was the issue of the lack of consultation with those First Nation representatives which was highlighted as a major concern for them as the Federal plan was rolled out over the last year.

That opposition to the moratorium was also raised by members in the audience who support the oil tanker ban plan.

With one participant observing how the legal efforts recently launched by the Lax Kw'alaams Band Council in effect  had resulted in a broken relationship, suggesting that with their approach to the issue the Lax Kw'alaams are in violation of a long standing peace treaty between them and the Haida Nation.

The discord in some communities when it comes to who represents the residents of First Nations also became a rather significant theme, with many contributors sharing their concerns over the differences of opinion found between the elected Band Councils and the Hereditary system that communities have.

The majority of those concerns related to what the participants called a lack of consultation with members when it comes to the large scale development projects that are negotiated in the communities.

The need for understanding of First Nations concerns and respect for their process towards engagement was something that Mr. Helin would frequently return to through his commentary for the program, with advice for developers to have an understanding of who they are.

"It's important to come into the community and understand who we are, we have one of the biggest communities in BC as far as band members on our list, over 3800 and most of them live in Prince Rupert so it's important to understand who you have to deal with and let us do our job so that we can go to our membership and get that information to them so they can understand what is being proposed. And to keep in mind that environment is always at the top of the list for any proposed development in our traditional community" 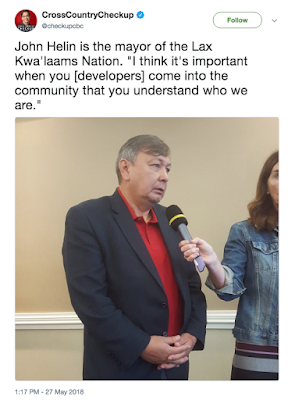 Mr. Helin also  explored the controversial issue of the activism of outside organizations, known as NGO's, who he suggested have come to the discussion with their own agendas.

He outlined his concerns about when the NGO's come into First Nation communities and how it serves to divide the people, a theme that has also been one that MLA Ross has frequently commented on in the Legislature through the last year.

The current of the program would frequently return to the need for control of resource development by First Nations, along with the ongoing discussions within First nation communities as to who speaks for the people that live in the region and the desire for a say in how those resources will be developed, if at all.

The wide gulf of opinion found in many of the communities does seem to highlight the comments from Mr. Ross earlier in the day as to the need to address the priorities of the moment and to make the original question of the day from Mr. McCue one which may remain unresolved in the short term.

That as the membership of First Nation's across the Northwest seek to sort out the growing differences to be found when it comes to how they should move forward on their ambitions for development and how to approach it.

If you did not tune in for the full two hours on Sunday, you can review the conversation from the program through the Cross Country Check up program page here.

We also have an archive of past Cross Country Check up programs available on our political blog D'Arcy McGee.

The program also has provided for a range of material to explore background issues related to Sunday's discussion.

Including a scroll of their social media stream which provides a snap shot of how the program unfolded over the two hours.

Larger background pieces also accompanied the Cross Country Check Up visit to the North Coast, you can review those below:


For further items of interest related to First Nation communities in the region see our archive pages of regional communities found here.


To return to the most recent blog posting of the day, click here.
Posted by . at 12:09 PM

Email ThisBlogThis!Share to TwitterShare to FacebookShare to Pinterest
Labels: Cross Country Check Up in Prince Rupert