Lack of civic clean up plans questioned by Councillor Cunningham


With the spring of 2018 soon to morph into the summer of 2018, Councillor Barry Cunningham has once again called attention to his desire to see the City embark on a comprehensive clean up campaign around the city.

This time his approach to the theme was to follow up on some notes from Mayor Lee Brain's Hays 2.0 presentation of April, with Councillor Cunningham asking about the City's strategy towards a full scale clean up for the city.

"At your H20 presentation you talked about a strategy for cleaning up the city and that, and it was just a brief touch on it and people have asked me what the strategy actually is and if its going to be implemented this year"

In response, the Mayor noted that it's all part of a five year plan for a community clean up process which will be part of a report that is still being worked on at the moment, with the plan not yet been fully solidified.

Mr. Brain further observed that it will explore how to approach clean up issues such as derelict autos and properties and the costs associated with a clean up. With the Mayor noting that it will be more of a five year process rather than doing it all at one time.

The Mayor  also introduced a new theme towards civic clean up ambitions,  advising that the City has been exploring the idea of using two lots, one on each side of the city, to use for trailer and boat storage opportunities for residents to help take some of those items off the roads.

He didn't offer up much more in the way of the details on that particular concept, such as where the lots may be located, or what kind of storage fees that the public might be expected to pay to use the two lots.

Mayor Brain did outline a hopeful timetable for the City report, advising how he expects that the report will come out shortly hopefully before the year ends.

That gave Councillor Cunningham cause to inquire if that then means that "in the meantime, nothing is going to be done" when it comes to a spring clean up around the city.

The Mayor advised that wasn't the case, noting that volunteer groups are constantly doing clean ups around the city, with Mr. Brain further observing that he would prefer to see a phased strategy to make sure that they address the top priorities, adding that he hoped to do something this year, but isn't sure when they might be able to move forward on the clean up plans.

The issue of the condition of the downtown core gained some significant attention back in Febraury of 2017, when Tourism Prince Rupert's Scott Farwell provided the Chamber of Commerce with a review of the visual image that Prince Rupert was presenting to the world.

And for the most part that visual image is still much the same as it was fifteen months ago, with many of those same downtown buildings still in disrepair. 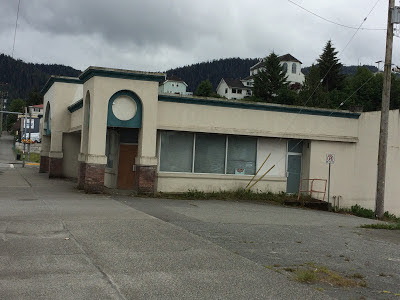 When it comes to keeping the topic of the condition of the city in the forefront for the public, Mr. Cunningham has done some fairly strong work, often raising the issue and seeking to see some action towards the growing list of unsightly buildings, derelict autos and other eyesores scattered across the city.

However, for all of Councillor Cunningham's good intentions, the actual task of addressing the many issues that he raises doesn't appear to have been much of a priority during the course of this council's four year term and if we're all going to have to wait for a report to detail the five year plan ahead, it would seem that the work to address the issue will remain on the back burner for a bit of time yet.

You can review more background on the questions for Council, as part of our Council Timeline feature here.

The exchange between the Mayor and Councillor on the theme of the City's Clean Up planning can be found from the City's Video Archive, starting at the one  hour, fifteen minute mark.

Some of Mr. Cunningham's past attempts to bring the issue to the attention of Council can be found below:


To return to the most recent blog posting of the day, click here.
Posted by . at 3:29 PM

Email ThisBlogThis!Share to TwitterShare to FacebookShare to Pinterest
Labels: Clean up concerns for Council