The lure of high paying Port and Industrial jobs in Prince Rupert is wreaking a bit of havoc in operations and planning for the city's small business sector, creating somewhat of a crisis situation for the city's business owners.

That appears to be the main take away from a fairly extensive survey by three members of the Business Community, who presented their findings to Council on Monday evening.

The trio which included Chris Armstrong, Kristi Farrell and Karen Sawatzky recently completed their Masters of Business Administration program with Simon Fraser University and as part of their studies they compiled a report into employee retention and hiring concerns from the business sector.

Their presentation and the follow up discussion accounted for a good portion of Monday's Council session, lasting some forty minutes over the course of the near ninety minute council meeting.

The themes provided an interesting glimpse into the state of the local economy for small business operators, with the quest for employees proving to be a challenge as the local work force explores the higher paying positions in the industrial field.

Something which even some of the small business owners themselves have explored, with closing storefronts a testimony to some of that labour migration. 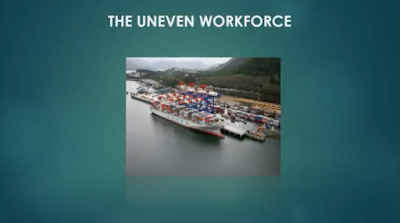 The nature of that uneven workforce has created a worker gap with the group identifying five areas where the impact has been felt the greatest.

From their report they have determined that the five areas in the most need for employees are the Retail Sector, Accommodation/Food, Transportation/Warehouse, Health/Social Assistance and Technical professions.

The twin impacts of higher paying industrial jobs and a population decline seem to be making for a perfect storm for the small business sector in the community.

As part of their review of the regions economic profile they determined that Prince Rupert and Port Edward continued to find a decline in population and along with that decline a rather startling statistic when it comes the local labour pool,  with their findings making note that 32 per cent were not currently part of the labour force.

They also observed however,  that Hyper economic growth in the community is providing for a growing economy, as seen from the hiring plans of DP World and other industrial options. 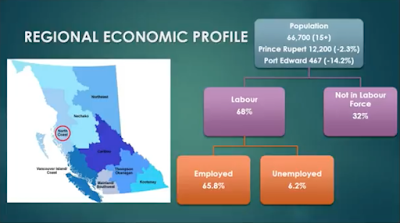 From their data, among all the areas of concern, it was the identification of that 32 percent that was not engaged in the labour force that most caught the attention of City Council members.

That number was an item of much interest for Councillor Joy Thorkelson who made note that there was a large pool of workers looking for employment with the recent closure of the Canadian Fish Cannery operations a few years back.

"I was just wondering, we just lost 600 jobs at the cannery two years ago, so I can hardly see that there's a real shortage of labour, they didn't all run away, and what I'm wondering is if really what the problem is that at minimum wage people can't find a place to stay"

Ms. Thorkelson also called attention to the city's high unemployment rates and social assistance numbers and how there may be other issues at play when it comes to the small business challenges.

"We have one of the highest unemployment rates in British Columbia, and we certainly have the highest or second highest rate welfare and unemployment insurance, and again I"m just wondering if there are other issues that Small business needs to deal with. And some of those are, trying to work together to schedule people so that they can meet a schedule. I know of quite a few of our ex members have had to work at two or three jobs and have had to quit some jobs because employers want them at the same and don't want them at the same time. So maybe employers can work together to make an attractive package for workers."

That theme of wages and housing issues would make for further commentary from City Council members, with Councillors Cunningham, Niesh and Thorkelson all observing as to how housing issues could be one of the elements that most need to be addressed.

Ms. Farrell had noted in her review of the situation in town,  that she and her husband had invested in housing stock in the community to provide for housing for those employees that may need accommodation, something which Councillor Cunningham commended and suggested was an approach that other business owners may want to address.

Councillor Niesh offered up a range of thoughts on the housing issues in the community and how it adds to the issue and needs to be looked at for a solution.

"We don't have developers knocking on our door because its so challenging to build here  ... if you could get cheaper housing , I think you could probably gain a lot more people too ... cheaper housing would solve a lot of the problem,  but unfortunately the people that want to build this, they don't want to lose money when they want to build. So maybe we have to start looking at almost like camp sort of options where people can come from other areas and have a place to get started."

"I think that it's not any fault of anyone, we've lost a lot of housing, we've had apartments burn down ... so we've lost hundreds of units ...  those were cheaper to rent, that's probably where we have to focus on"

Councillor Cunningham also picked up on Councillor Thorkelson's thoughts on the need for Small Business owners to better co-ordinate their scheduling and employee demands, with Mr. Cunningham noting that better planning and more challenging job opportunities might be of some assistance towards employee hiring and retention.

One theme introduced by Councillor Randhawa seemed to gain a mixed reaction, with the Councillor's observation that one approach and solution to the situation may be to bring in foreign workers to fill some of the vacancies.

That was a topic that Ms. Farrell noted was under study, with an immigration consultant set to arrive in town to discuss that avenue with local business owners, though she also noted that the topic of introducing foreign workers is a controversial one at times.

Councillor Thorkelson also had some thoughts on that theme, noting how it didn't make for much sense to bring in a volume of workers from out of town to the community to work at minimum wage jobs if there is nowhere for them to live.

When it comes to what the trio would like to see come from their report, they asked for an Action Task Force to be formed, to create a collaborative business/community approach and for Council to acknowledge that there is a labour shortage crisis specific to the service sector and to investigate how to reduce employee and resident turnover rates. 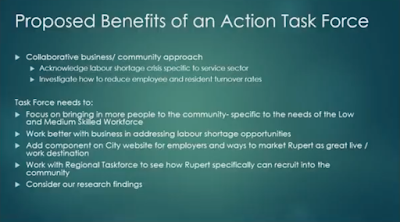 Councillor Blair Mirau noted that many of their concerns meshed with the work of the City's Small Business Advisory Council and outlined how they would be meeting in a workshop setting where many of the same issues will be reviewed.

The Mayor also observed how some of their goals were similar to the interests that the City has expressed in the past, he called attention to the city's new economic information site, which he observed answers some of their concerns.

He also suggested that they should contact Paul Venditelli at the Economic Development Office to further their study and to explore further options.

The full overview of the discussion points, findings and proposed solutions from the three, can be reviewed from our Council Timeline Feature here.

The presentation is also available on the City's Video Archive, starting at the twelve minute mark.

For more items related to the Small Business sector in the Northwest see our archive page here.

A wider overview of City Council discussion points can be found on our Council Discussion archive.