Some good news for Prince Rupert's Cherry Blossom lovers, there appears to be some success being found with the recovery project taking place alongside the DFO offices on Fourth/Fulton Street in the downtown core.

One of the stand of four has shown resiliency with new blossoms now on display along the sidewalk on the west side of the Federal building, the other three trees also show some signs of a potential recovery as well, with some buds starting to appear, but no blossoms to view just yet.

That development comes after work was done to the trees which saw branches grafted onto the stand, with a contractor hired by the Federal government to conduct the rescue work hoping to see a full blossoming tree again over the course of five to six years.

To aid in that recovery period, residents are asked to not disturb the trees in any fashion to allow them to regenerate naturally and without further trauma. 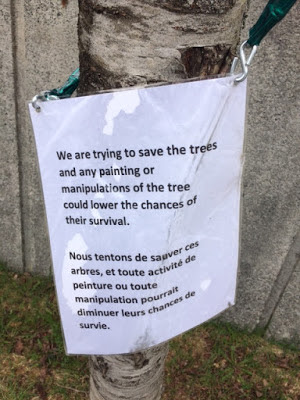 And while, the visuals are nowhere near what the trees provided for last year, the few blossoms to date suggest that there may be some hope yet that the trees will recover over the next few years to once again make for a picturesque landscape in the downtown area.

The trees were severely damaged and nearly taken out completely after some landscaping work was ordered by Public Services and Procurement Canada, the Federal Maintenance body that oversees federal buildings in British Columbia.

The incident at the time back in March made for a significant controversy in the city, leading to a call for action from the City to seek redress from the Federal government for the severe trimming.

You can review some of our notes on the story below:

Those that have advocated for the trees over the course of the last six weeks will no doubt be very happy to see the revival project moving ahead with some success, perhaps hopeful as well for an update from the City or Federal officials, as to what other steps are being planned to commemorate the donation of the trees and to safeguard them for the future.

Like many in the community, Mayor Brain was outraged at the discovery of the original incident back in late March, taking to his social media feed to offer up some background on the situation.

To this point he has yet to provide for a follow up post to indicate a blueprint for the community for the path forward on both the rejuvenation project, or what other steps the Federal government may take as they extend their olive branch towards the Cherry blossom incident.

For more items of interest about events on the North Coast see our archive page here, notes related to issues brought to the attention of the City can be found on our Council Discussion archive.
Posted by . at 2:28 PM