With the city returning Doug Kerr field for use by local youth sports teams, plans are under consideration to re-dedicate the field in the memory of Doug Kerr and install new signage at the field as a way of thanks for community partners in the project.

The field which was closed for use to the public back in 2013, became an unofficial dog park in recent years, the city undertaking the renovations this spring as part of their capital spending plan.

In a report for council from Corporate Administrator Rory Mandryk  it was noted that during the last four years, the name Doug Kerr Field had been transferred to the Roosevelt Field, with the plan now to bring it back to Civic Centre complex, with an official reopening planned for June of this year.

City Council announced the renovation work for the field this year, with City Crews spending much of April and May working on the field, looking to have it in use for the current baseball and softball season.

However, some trouble spots have popped up when it comes to the field replacement plan, the largest one coming from the April windstorm, which lifted large tracts of the newly placed sod, requiring some extended attention. 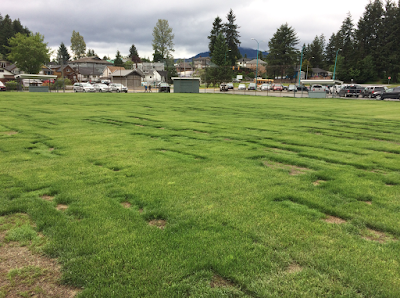 The cost of the name reinstatement plan is expected to be 800 dollars for a new sign and staff time required for its installation.

In addition to the capital budget spending, the project was made possible by community donations from local organizations such as the Port of Prince Rupert, Pembina Pipelines, Sperling Hansen Associates, Broadwater Industries, L and M Engineering, Rupert Wood and Steel and RONA Tyee Building supplies.

The City hopes to further recognize those sponsors and pay tribute to the family of Mr. Kerr at the public celebration of the Grand Re-opening at the June event.

You can review the full report for Council from the City's Agenda Package for tonights Council session, it is found on page 13.

A wider overview of City Council discussion topics can be found from our Council Discussion archive page here.

To return to the most recent blog posting of the day, click here.
Posted by . at 9:51 AM