One of the major themes from a business study presented to Prince Rupert City Council on Monday night was the impact that housing is having when it comes to those employees making minimum or just above minimum wages in the community.

The report compiled by Chris Armstrong, Kristi Farrell and Karen Sawatzky explored a range of issues that are impacting the small business sector, from the lure of Port Jobs and salaries, to the lack of participation of 32 percent of the labour force in active job search among the areas of note.

But  as the discussion moved forward, the topic of a lack of affordable housing was raised again and again through much of the forty minute discussion between members of the business group and the city's Council members, calling attention to the ongoing need for affordable housing that has been heard for much of this council's four year mandate to this point. 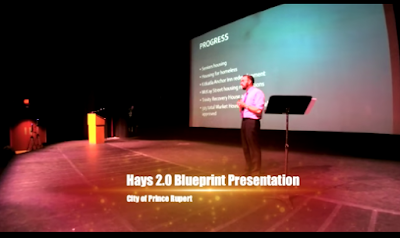 During his 2.0 Hays Vision presentation of last month, Mayor Lee Brain made note of the volume of housing approvals that City council has put in motion since taking office.

The number of 315 housing approvals makes for an impressive number of potential projects, but as anyone who has wandered around the city might note, it's a number that is nowhere near in the process of being added to the housing stock of the community.

So far, the only real movement on the housing front has come with an approval of a Seniors living facility in the old Neptune building which has yet to open, and the development of a number of high end residences on Van Arsdol.

Also on the list is the near completion of a triplex that will be overlooking Prince Rupert harbour on First Avenue West and a property that would appear to be a bit beyond the kind of housing stock that those on minimum wage might require.

In the case of the Neptune project, with the City approving the building for Seniors use, something that is required, they also eliminated a number of what had been affordable housing units for those looking towards the lower end of the pricing spectrum.

One other development approved by this Council was the renovation of the old Baptist church on India Avenue, which was turned into a number of Executive residences, a price point most likely out of reach for those making the minimum wage or just above it.

One positive bit of housing news comes from the recent announcement of the Supportive Housing facility for the homeless to be located on Park Avenue for those in the most need of emergency shelter, but that is not really going to solve the larger issue on affordable housing as identified by the business group and the city on Monday.

Of the many other housing proposals approved by Council however, none have yet to break ground with the downtown condo project, a project proposed for Prince Rupert Boulevard and an extensive housing development off of Park Avenue still very much more of a proposal than an active construction site.

During the course of the discussion of the Armstrong/Farrell/Sawatzky report at Monday night's council session, Councillor Wade Niesh offered up a few observations on the housing situation in town.

So maybe we have to start looking at almost like camp sort of options where people can come from other areas and have a place to get started."

"I think that it's not any fault of anyone, we've lost a lot of housing, we've had apartments burn down ... so we've lost hundreds of units ... those were cheaper to rent, that's probably where we have to focus on"

So the question for Council members perhaps to turn their attention towards is, why with so many housing approvals granted, has the stock of the city's housing remained in such a tight condition?

One project that did seem to offer up some hope for those looking for more affordable housing was the Kanata School land proposal, which would have seen a number of apartment blocks created on the site of the old school.

The sale of the land would also have provided the School District with close to a one million dollar payment for the purchase, something that they had hoped to reinvent in District facilities.

However, the fate of that development has become a long running irritant for the School District which has often expressed its frustration with the City on the issue.


That project appeared to go off the rails when Council and the developer could not agree on the addition of a number of amenities to the neighbourhood, the main thrust of those discussions took place back in March of 2016, when the zoning issue made for a lengthy discussion by Council as to how they wished to see the Kanata land developed.

Two years later, with the outstanding issues seemingly not resolved, the developer the Bryton Group appears to have walked away from its plans, something that gave the School District cause to express its disappointment with the City.

During the back and forth between the City and the School District on that land issue, Councillor Mirau weighed into the debate with a note for his Facebook page on March 6th noting again the progress that the city has made when it comes to housing approvals. 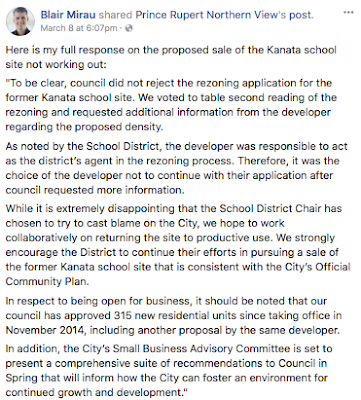 However, with little to show in the way of actual units constructed  for people to move into, Council members may want to review some of their past work if they're looking for some answers when it comes to why there is such a housing crunch in the community and how that lack of affordable housing continues to impact on the local economy.

Council members are correct when they note that they can't force builders to actually get to work and put a shovel in the ground, as well as to how there are other factors that can slow down that pace of construction.

But when they zone the majority of the available land for what are in the most part high end projects, or make the prospect of development so unworkable through their requirements of those builders that they walk away from their plans; then it isn't rally all that hard to see how the pace of housing development has stalled and the problems for those in the most need of housing continue to grow.

You can review the ebb and flow of our housing prospects from our Housing archive page, which features a look at the housing situation on a year to year basis.

More items of note related to past City Council discussions can be found on our Council Discussion page.