The Mariner's Park playground will be the main attraction in late June as the City of Prince Rupert prepares to celebrate the Grand Opening of the new play facility, paying thanks to the long list of community sponsors and partners that helped to bring the project together.

The event set for June 23rd will take place from 11 AM to 1 PM and will include a Free BBQ and Face Painting as well as the prospect of a visiting pirate dropping by.

The Park has recently been the focus of some community concern over the deteriorating condition of the play area, which has been coming part in some areas, with the City recently noting that they have been in touch with the contractor to do some warranty work on the site.

That remediation project is set to take place before the June 23rd Grand Opening celebration.

The City of Prince Rupert has created an event page in the lead up to the June festivities. 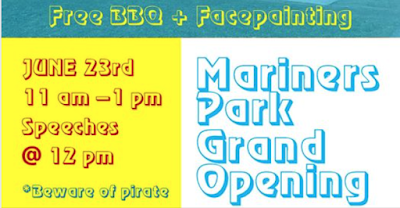 The Mariner's Park project is one of a couple of local initiative that have run into some unexpected situations of late, the McKay Street Playground is still awaiting some final work and an insurance inspection before it can get its official opening.

There has been no update yet as to when that park will be officially declared open to the public.

As well, the opening of the Doug Kerr Field at the Civic Centre suffered a setback with damage from last month's windstorm delaying its use by local youth baseball and softball teams.

It's hoped that the Civic Centre facility will be available for use later next month as well.

To return to the most recent blog posting of the day, click here.
Posted by . at 11:13 AM