The Province of British Columbia is going into the bus transportation business along the Highway 16 corridor and points north of Prince George. Announcing today that as of June 4th, the BC North Bus will pick up the service that is being abandoned by Greyhound Canada.

The service will be funded by the province for twelve months and buys the government some time to examine and evaluate the demand for the transportation link and to develop a long term transportation solution for the North and Northwest.

Premier John Horgan made the announcement on Tuesday afternoon making note of the province's responsibility towards providing safe and efficient transportation in the North.

“People in the North rely on transportation for their livelihoods, to access the health and education services they need, and to visit family and friends,” ... “In the face of Greyhound’s decision, our job is to make sure northern communities and the people who live there are able to stay connected through safe, reliable and affordable public transportation.”

The service to be operated by Pacific Western Transportation will make use of four highway motor coaches that are equipped with luggage and washroom facilities.

BC Transit's interim President and CEO, Erinn Pinkerton observed as to the work that the transit system has put into finding a solution to the challenges provided by the exit by Greyhound.

“We’re looking forward to delivering a long-haul service for the first time to connect people and communities in northern B.C.,”  ...  “Our team has been working hard to find ways to make this interim solution meet the needs of customers in the North.” 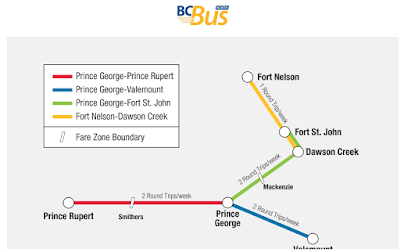 The BC North Bus will service Prince Rupert from the Highliner Inn at the corner of 7th Avenue and 1st Avenue West, the same location that Greyhound bus used. 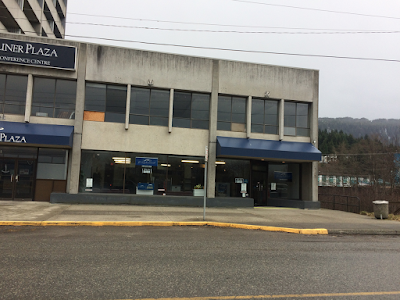 The Bus departs Prince Rupert at 8AM on Friday's and Sunday's, with buses arriving in Prince George at 7:50 PM. 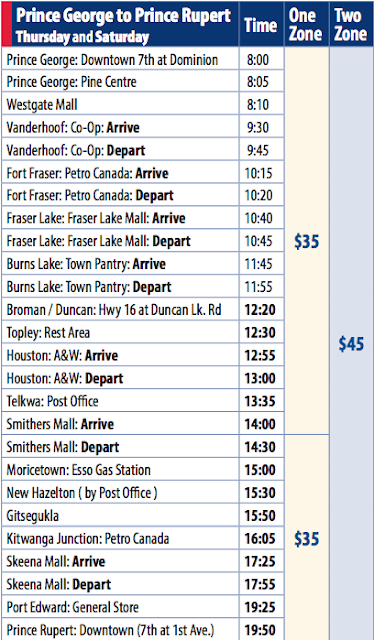 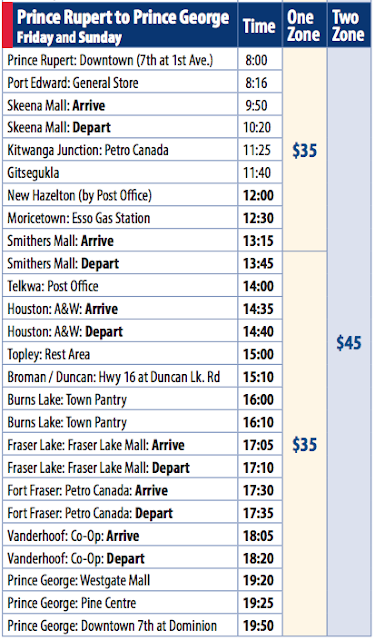 See this link to view the service and rates in the other areas of the BC North system.

The twice a week schedule will still leave some gaps, particularly from the Northwest where the Monday to Thursday period will remain limited to the short haul runs that BC Transit operates from Terrace to Prince George.

As well as options for travel through VIA Rail between Prince Rupert and Prince George.

From the North Coast, the Friendship House is offering a twice week shuttle bus service between Terrace and Prince Rupert, which runs on Tuesday's and Thursday's.

As the twelve month test period continues forward from June 4th, it will be up to the residents of the region to make the case for the prospect for any expansion of service outside of the twice a week runs now scheduled. 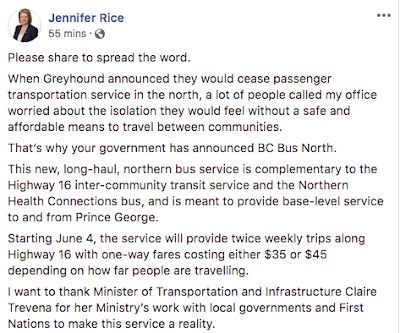 For more notes related to today's announcement see this information release from the provincial government.

A look at some of the transportation issues of the Highway 16 corridor and Northwest BC can be found on our archive page.

Further background on news out of the BC Legislature can be reviewed from our Legislature archive.

To return to the most recent blog posting of the day, click here.
Posted by . at 4:04 PM

Email ThisBlogThis!Share to TwitterShare to FacebookShare to Pinterest
Labels: Highway 16 transportation service introduced by BC gov't