Amid reports of problem areas in the city; Council hears of Knotweed eradication plan 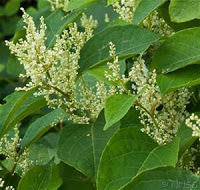 Councillor Barry Cunningham relayed some concerns of the public on Monday evening, highlighting the ongoing issues of knotweed, asking for some clarification on the city's plans to deal with the invasive species this summer.

As part of his inquiry, the councillor noted that some areas of civic oversight such as Miller Bay and Rushbrook Trail are hosts for the invasive plant.

In reply to the observations, the Mayor offered up some thoughts on the issue, noting from personal experience that on private property it is the responsibility of the home owner to address knotweed.

As for the public land he advised that the best time to treat it is at the end of August and start of September. He advised that the city is looking to make use of staff members in the future, with two city employees now certified to address knotweed issues, with the City now awaiting a licence to use the chemicals that are required for eradication methods.

The Mayor observed for Council that should the city not receive that licensing by the end of the summer, they will turn again to private contractors, though he noted the complications that weather can provide when using private contractors who are based out of town and that the longer term solution of the city handling the issue would be the best course.

"We essentially want to eradicate knotweed all over town, particularly on city property ... Our operations team has a wide and robust plan to tackle that, right now what we are trying to do is get the ability to be able to do it internally, as a staff rather than wait for contractors from Prince George to show up.

The other problem too is that you can only get rid of knotweed in sunny weather, so what happens is because we are in a contracting situation you kind of have to wait for timing call them, get them to come here as fast as possible while the sun is out and get them to treat the knotweed .... so having it internally, once we get the chemical licence then we are able to purchase the chemical, then we will be able to be much more responsive to it, so we have short term and long term solutions in place for that" -- Mayor Brain with a short synopsis of the City's plans for treating knotweed in 2018

Councillor Cunningham followed up with a question related to that short term plan to address the city property that has been affected, the Mayor reinforced the outline of the plan that would see the City approach a contractor to address the most prevalent areas where the the problem exists.

The issue of knotweed became a concern for the city of Prince Rupert back in 2016, when they launched their first attack on the rather hard to defeat foe, providing for a spraying program on city lands and noting that the public is responsible for the eradication of the weed on their personal property.

The details of the city approach from 2016 were posted to the City website with this advisory.

In May, the Province of British Columbia also highlighted its concerns over invasive plants in the Northwest, providing funding to the Northwest Invasive Plant council, a Prince George based organization that covers much of Northern British Columbia from the Alberta border to Haida Gwaii.

You can review more of Monday's discussion on the city's plans for this summer from the City's Video Archive starting at the thirty minute mark.

A wider overview of Council issues can be explored through our Council Discussion archive.

To return to the most recent blog posting of the day, click here.
Posted by . at 10:07 AM

Email ThisBlogThis!Share to TwitterShare to FacebookShare to Pinterest
Labels: Knotweed plan for 2018