City of Prince Rupert to support Nathan Cullen's call for federal attention to Highway 16 transportation issues, add on concerns over VIA Rail as well 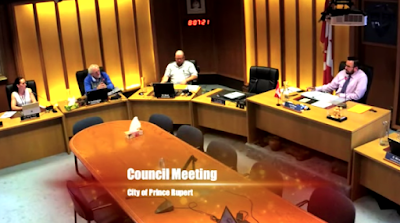 During the course of their Monday evening City Council Session, Mayor Brain and his five council counterparts turned their attention towards the soon to be terminated Greyhound Service across Northern BC.

The conservation coming as a part of Council's review of a letter from Skeena Bulkley Valley MP Nathan Cullen, who is seeking the support of municipal government across the region, as he looks to engage the Federal Government to take an active interest in the issues facing communities across the Highway 16 corridor. 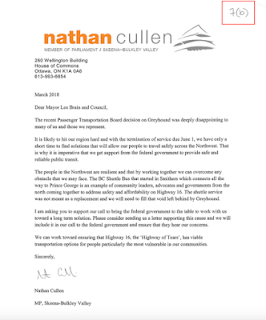 The letter which we made note of earlier this week, explores the impact that the end of the
Greyhound service will have on many communities and called for the Federal government to provide safe and reliable public transit.

"I am asking you to support our call to bring the federal government to the table to work with us toward a long term solution.

The discussion by Council prior to their approval for the letter of support for the MP, provided a short review of the current transportation options that are in place and a hint from the Mayor that after his discussions with other Mayors and the province in a conference call on the issue, that there may be a new provincial plan in the making to address the need for a continuous service along the Highway 16 corridor.

For those hoping to see the City join in as part of the current Highway 16 Transportation plan with BC Transit and to share in the funding for a shuttle bus service from Prince Rupert to Terrace, the conversation by council would seem to indicate that project remains one that the City will stay away from.

With City council continuing to endorse their decision to support the two options  available locally at the moment; that of the Transportation plan from the North Coast Transition House and the Friendship House shuttle bus service which runs twice a week.

Mayor Brain noted that when the City chose not to participate in the provincial led service, it was because they did not want to duplicate local services in place, advising how the Friendship House service mimics what would have been the same kind of schedule as the provincial plan.

"The Friendship House quite literally mimics the shuttle service that we would have opted into, so one of the reasons why we didn't go there is because we didn't want to duplicate service for that. The Transition House service was a separate service that is a 24 hour a day, seven day a week solution, which was to have a call number or text number where anyone day or night could call the Transition House and get a pick up ... they would then be brought back to the Transition House and a day later they would be  trained out, bussed out or flown out to the location that they needed to go to, most likely through Greyhound."

The timeline for the Mayor's remembrance of events however seems a little bit off, as Prince Rupert City Council and its regional partners bowed out of the Provincially led shuttle service in December of 2016.

The Friendship House shuttle project was first announced in March 2017, when the Community organization secured funding for their bus, with the service only going ahead in January of this year.

Which means there has been close to a year of operation for the Provincial program without any link to Prince Rupert, with the Transition House program the only one in motion during that period of time.

The province has frequently expressed hopes that the North Coast would join in on their shuttle program, making note of it often as they expanded their service from community to community.

However, for now, it remains unlikely that the City has any plans to move towards the BC Transit shuttle program, with Councillor Joy Thorkelson offering up a cautionary note towards getting involved in the short term haul concept, calling instead for a more continuous service from Prince Rupert to points east.

As part of Monday's discussion the mayor further expanded on the services offered by Transition House, and acknowledged that the Greyhound ticket option is about to be removed for Transition House leaving just Ferry or Rail as the transportation options available, with the goal now to figure out as a team what the longer game is going to be as far as continuous service, adding that technically that its a provincial responsibility.

Councillor Niesh for his part called attention to the inequity between how the province handles transportation needs in the north and rural areas as compared to the larger cities and noted that the city needs to remind the province that it's not all about the Lower mainland, but about us too. Calling for transit services that are not put on the back of the community.

Council members also added the concerns related to the VIA Rail service to the community raised by Councillor Randhawa as part of their correspondence in support for Mr. Cullen.

Mr. Randhawa had observed as to the current state of the VIA Rail service to the community and how the passenger trains were frequently many hours late arriving in Prince Rupert, his call to include the VIA concerns to the letter were echoed by Councillor Cunningham, who noted the service is getting worse all the time and makes it hard for visitors to the city and is a concern for the community.

The Mayor Brain concluded the conversation on the night with one final observation to theme:

"Us, as a Council, we essentially are supporting two streams, one is the Transition House stream which is the 24/7 solution and the other is us supporting the Friendship House with their service which is the two buses a week, which is the same schedule that it would have been with the inter community link. Now the next step is all of us working together on a continuous line and I think that the province will have more to say about that within the next few weeks."

You can review the full discussion on the Greyhound issue and Mr. Cullen's letter from the City's Video archive, with the conversation starting at the one hour, one minute mark.


Further notes related to transportation along the Highway 16 corridor can be found as part of our Transportation archive page here.

More background on Monday's City Council session is available from our Council Timeline Feature, while a wider overview of City Council discussion topics can be explored through our Council Discussion archive.

Email ThisBlogThis!Share to TwitterShare to FacebookShare to Pinterest
Labels: Council letter in support of Nathan Cullen on Highway 16