New Kayak float for Cow Bay Marina and those that will use it, makes for discussion theme at City Council


Monday evening's Prince Rupert City Council Session, brought word of a new addition to the Cow Bay Marina facility, as Marina Manager Robin Beattie provided Council members with an update on the soon to be officially opened Kayak float, found at the far end of the finger dock in Prince Rupert harbour.

The new float which we first took note of last month, while not officially declared open yet, has already seen some use, with curious Rupertites launching their kayaks and paddle boards from the dock, as well as one group using the dock as a storage area for outrigger boats.

The outrigger use of the float, made for a theme that would come to dominate much of the discussion on the  new addition as the Council session moved forward. 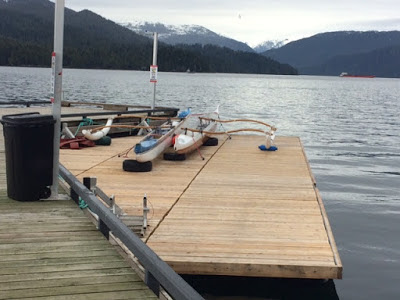 The Marina Manager opened his presentation with some drone footage to better identify the location of the float for Council members, and then outlined some of the elements related to the new public space and the final touches that are still required to make it more user friendly. Those being some access stairs and a ramp to make the transition from the main dock to the float dock much easier.

In his opening remarks, Mr. Beattie also praised the leadership of the Mayor and Council to bring more community access to the city's waterfront area, observing how the float dock was part of the phased approach to development of the Cow Bay Marina facility.

He also observed that while not officially opened, the facility has already been used by residents to launch their small personal crafts, though he has officially advised that it's not yet allowed, he also counselled caution for those using the facility.

That provided Councillor Randhawa to inquire about liability issues, in reply Mr. Beattie noted that there is a two hour limit for those making use of the dock and that the insurance for the facility, including the new float was part of the Municipal bylaw process.

He did add that like any public facility, responsibility for safety it is on the user themselves.

One topic that did make for some extensive review, was the continuous storage of two outrigger boats, with Councillor Barry Cunningham raising a number of questions related to public use of the new float.

Councillor Cunningham, first observed that he thinks the addition was a great thing for the dock, then called attention to the two large outrigger vessels that have been in place on the float for an extended period of time, asking for some background to that situation.

"I noticed that you call it a kayak float and you say that there is a two hour time limit on there ... so I've noticed that there have been two vessels on there for two weeks, two months, so what's the deal with that then" -- Councillor Barry Cunningham on use of the new float dock at the Cow Bay Marina

The Facility Manager noted that they belonged to a Community group called the Prince Rupert Outrigger Society which has made arrangements to leave the vessels there, as they provide a service of providing trips for the community through their Society.

In a follow up question, Mr. Cunningham asked if anyone else could store their kayaks or other vessels on that float location, he was advised that there is no storage space available at the Marina, adding that when people tie up, they will be required to take them to shore, or take them to their vehicles.

Mayor Brain noted that the facility isn't officially open to the public yet, with Mr. Beattie outlining that it is being used, advising as to how he tries to keep users off the float for now,  or at least counsel them to use caution when using it as there is a gap that is required to cross over to the float.

Mr Cunningham then offered one more inquiry on facility use, asking as to if there were charges for users, and if the Catamaran club was paying for its use of the float.

In reply, Mr. Beattie observed that there is no charge for anyone to use the float, and that the Catamaran Society was not paying anything to him for their extended use of the floats as they were providing a public service similar to the Dragon Boat Society, doing a lot of stuff for the community.

That provided an opportunity for Councillor Cunningham to inquire if the Dragon Boat Society could store their vessels on the float, he was advised that the Dragon Boat group did not use the float, or the Marina for their storage.

When it comes to the work of the Outrigger Society in the community, finding anything about them is a bit of a challenge, the group does not appear to have any form of internet presence, with no website or Facebook page readily listed or advertised, for those that may wish to inquire about using the vessels and how they could make use of the community resource.

The group is also not listed in the City of Prince Rupert's own Community Directory, which one would think would be a natural place to find some kind of contact information, particularly as they appear to be using the public dock for their storage purposes.

On Councillor Cunningham's themes of compensation, or terms for use of the float dock by the Society,  while the Cow Bay Manager may not have been able to answer the councillor's questions, it did offer an opportunity for the City's Financial Officer, or City Manager to clarify the situation, but they were not asked to participate in the discussion, nor did they weigh in on the topic during Monday's meeting.

As for other elements of the Cow Bay Marina and the forecast for the upcoming season, Mr. Beattie provided a short synopsis of how the next few months may go, observing  that he did not have a lot of specifics to share, but did note that spaces for July were filling up fast and that the Marina is looking like it is going to do better than it did last year.

A more detailed review of his presentation can be found on our City Council Timeline feature here, while the full presentation is available from the City's Video Archive below, the presentation opens up the evening's work for Council:

To return to the most recent blog posting of the day, click here.
Posted by . at 10:19 AM