Petronas is all in for Kitimat's LNG Canada project 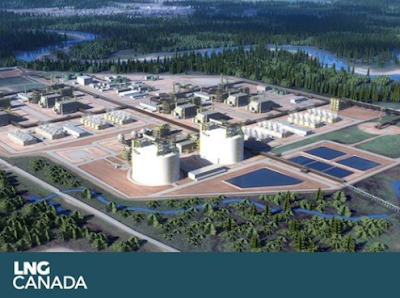 Discussions to bring the Malaysian energy company Petronas back into the development of B.C.'s LNG industry have come to a successful completion, with the former Lelu Island proponent about to become the latest partner in the Shell led 41 billion LNG Canada project in Kitimat.

In the early hours of Thursday morning, LNG Canada announced the completion of the deal, with Petronas set to take on a 25 per cent  equity share of the venture, pending regulatory approvals and subject to closing conditions. 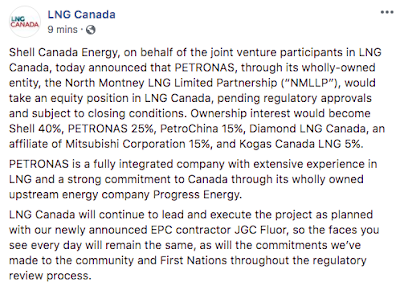 A familiar name for Prince Rupert LNG followers hailed the financial stake that Petronas is about to take on.

“PETRONAS is pleased to be part of the LNG Canada project. As one of the world’s largest LNG producers, PETRONAS looks forward to adding value to this venture through our long-term expertise and experience across the LNG value chain. We are committed to deliver LNG and natural gas, the cleanest fossil fuel in the world, to the growing global energy market,”

With the latest investment in the Northwest, Canada has now become the second largest resource holding that the company has after Malaysia.

Some background on their involvement with the LNG Canada project can be found here.

We first outlined the renewed interest in LNG development from the Malaysian energy company back in April, when word first began to circulate related to their plans to seek out a share of the Kitimat project.

The news of the Petronas plans, is the latest indication that the Kitimat project is inching closer to a Final Investment Decision which would set in motion the first significant LNG terminal development, with Petronas to join a roster of  resource companies in the project.

Shell remains the dominant partner at 40 percent,  with Mistubishi and  PetroChina  both holding a 5 per cent share. The Korea Gas Corporation holds a five per cent stake in the project..

In addition to its financial resources, Petronas will also be able offer up their supply of gas from Northeastern British Columbia, which could be the most important aspect of their participation, along with the financial heft that they will deliver.

Word of the Petronas plans came one day after they delivered financial results from the first quarter which saw the company profit increase by 26 percent.

Shell Canada has yet to provide for its Final Investment Decision to move forward with the development, however, with Thursday's announcement, optimism is increasing in the LNG industry that the first terminal development for the Northwest will soon be moving forward towards a construction timetable.

Some notes on the early morning announcement can be found below:

For more background on the Kitimat LNG project see our archive page here.

To return to the most recent blog posting of the day, click here.
Posted by . at 1:30 AM