Prince Rupert City Council received a primer on the  recreation activity of out-rigging on Monday evening as a representative of the Prince Rupert Outrigger Association, with Colin Masson serving as the spokesperson for the group, providing for a thumbnail sketch of what the organization is all about and how they serve the community

Mr. Masson explained how the registered Non Profit Society had been in existence in Prince Rupert for a number of years and currently consists of some 25 active members, a number of which were in attendance in the gallery for the presentation.

The spokesman for the organization on the night highlighted how the main purpose of the Society is to provide for the ability for safe and enjoyable marine transportation through the outrigger canoes. With both members of the Society and guests making use of the vessels.

As part of his presentation, Mr. Masson also outlined how the organization is insured and noted how they had enjoyed the use of the dock at the Cow Bay Marina, having paid fees of $325 in 2016 and $550 in 2017, with the Association understanding that while no policy is in place, they would be supporting and willing to work with the City to develop a policy related to the access of the community dock.

Ho observed as to how a number of the Outrigger membership are also participants with the Dragon Boat group in the community and highlighted the different requirements for each type of vessel.

The message that the group wished to bring to the City included:

The Society exists, they are a registered society with a number of active members and they encourage and foster members of the public to come and try out paddling through the summer and other months.

They have appreciated and enjoyed access to the dock over the last couple of years and expect to continue to contribute in whatever way is deemed to be appropriate and fair.

They are more than willing and would be keen to support the development of policies as the City works on them to determine what kind of access and arrangements are deemed to be fair and reasonable.

Mayor Brain thanked him for his presentation and added that their use of the dock is a great thing that having access to the water again is the reason that the city had the dock built as a public access dock, which the group has been doing.

The Mayor personally saw no real issue to stop them from carry on with their use of the dock, with the organization having Seafest events and courses planned for the future. Mr.Brain suggested that staff could figure out an interim solution to keep them down there and did not expect that there would be any opposition from members of Council.

"I think that this is a great thing actually, having access to the water again was the reason that the Marina was built, there is a public access dock you've been using it for this time. Interimly, personally I don't see any real issue continuing on. I know you have some Seafest events you wanna get people moving forward there are courses you wanna to run, the dock is designed for public use. You know so I think we could easily  have staff figure out an interim solution to keep you guys down there and I can't see any opposition from council having you guys down there. You are in  multiple different organizations with the Dragon boats and canoe club, so I mean that's what we want, we want people using the dock"  -- Mayor Lee Brain expressing his enthusiasm for the Prince Rupert Outrigger Association and its use of the Cow Bay Dock.

The Mayor did observe as to the need for the City to develop a longer term policy related to access for the facility, something which he stated would be a simple thing to figure out.

The Mayor also noted the Organizations' has indicated plans to apply for an in kind donation through the Community enhancement grant process related to access to storage of one boat for next year.

As for questions for the organization, only Councillor Cunningham, who was the first to make note of the use of the new Cow Bay float by the organization a few weeks ago, provided for any extensive commentary, or review related to Monday's presentation.

First thanking the group for their time and then noting that his over-riding concern is to avoid the issue of exclusivity and how he wants the dock to be open to the whole public.

" I think it's great, thanks for coming,  I really like the idea of it, my only concern is exclusivity, I want that dock used by whoever wants to use it and in your letter here, you say people have to join the club for the insurance. Well what happens if kayakers, or something like that, or canoe people it's a community asset and giving it to just one group is my only concern, I think it should be open to the whole public" -- Councillor Cunningham with a few observations on the need for full access to the Cow Bay Dock float facility.

Mr. Masson reviewed how his organization views the use of the dock and that their group is not exclusive and is open to anybody at any time that wishes to join, adding that their Association is just one group that may want to access the dock.

He further observed that whatever structure or guidelines are developed by the City that they would be open to the general public and that as such the organization would apply like others would, adding that their discussions are all around fair and reasonable access.

Mr. Brain brought the presentation on the night to a close, by advising that the city would look to get something in place on an interim basis, noting that the dock is available for access to other users as well, offering up the city's support for the work that the Outrigger group does in the community.

"So we'll get an interim something here for this summer, get you guys paddling, get you guys out on the water cause that's what's important to us. I know that other people can use that dock to this day and using the kayaks and things so I know its open and there's access I think some of the questions around some of the storage of maybe one of the vessels you guys have, I think these are easy things to figure out." -- Mayor Brain's final thoughts on the use of the Cow Bay float

While a helpful guide to what the organization does, Monday's presentation could have left the viewer at home with a few questions as to how the organization works and how the city plans to move forward in providing access to the dock in the future.

Despite the wide ranging overview of the Outrigger Association and their dedication to their sport, there is still little information, or online presence available to offer more background as to the operation of their Society and how residents may access the sport, or contract the group, other than by hanging around the Cow Bay Dock until the vessels take to the harbour.

Though with Seafest plans ahead, a good opportunity to learn more about the group would seem to be on the horizon for those with an interest in exploring the activity further.

For City council there is the need to provide for more background for the public related to the roll out of the new float facility at Cow Bay.

It is an addition which more or less appeared with little in the way of notice or discussion by council and for the most part has not been advertised as available for use by the public.

Considering the recent interest in the use of the float by the Outrigger Association it would seem that their residence on the float has caught many of the City Council members by surprise, or was something that perhaps might have been discussed in a closed session, with the use of the facility taking place with no discussion, or few details provided in public session as to who may use it and what kind of access that other users could reasonably expect to be granted. 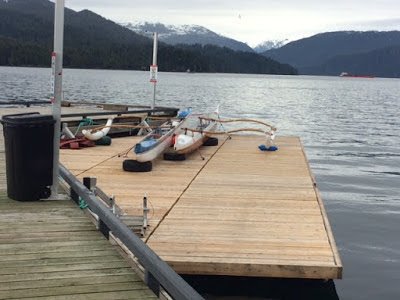 As well, with the Outrigger association taking up its residence on the float and using a fair portion of the new addition for storage of their vessels, the question might be asked as to what room is left for any other group that may wish to also make use of the facility and what the terms of their use may be.

All of which could be items to address as Council works out its policy plan for the future and how the public access of the dock can be guaranteed for all that may wish to use it.

You can review the full presentation to council from the City's video archive, the introduction to the Outrigger Association can be found at the start of the Council session.

A wider overview of items of note from Prince Rupert City council can be found on our Council Discussion archive page.

To return to the most recent blog posting of the day, click here.
Posted by . at 9:35 AM

Email ThisBlogThis!Share to TwitterShare to FacebookShare to Pinterest
Labels: Outrigger Association updates its plans for use of Cow Bay Dock