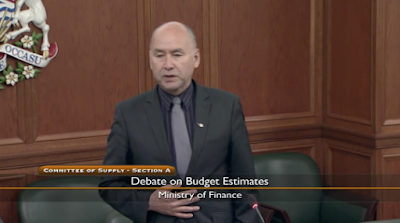 Skeena MLA raised a few questions on Finance issues this week at the Legislature, taking part in the Committee session exploring estimates from the Ministry of Finance on Wednesday afternoon.

Mr. Ross opened his contribution to the session with some comments on the need for a further review of the dual agency approach (where agents represent both buyers and sellers) to real estate in the province and how the provincial government's plans are making for some hardships with realtors in the Skeena riding, noting that many of those in the real estate industry suggest that the problem is one that is more of concern to the larger population areas, as opposed to the rural parts of the province.

The Skeena MLA also had inquires of Finance Minister Carole James on the hotel tax and the need to use it to promote tourism as the industry is set to suffer this summer with the concerns related to the recreational fishery in the region.

Just to clarify what's going on in the riding right now, the Skeena riding just got notice that the chinook fishery will be closed down for recreational fishing on the Skeena River, and there's talk about cohos and chums being next. This is going to be a huge hit to the tourism industry in Terrace.

My constituents understand the hotel tax is voluntary, but they have asked me to clarify whether or not the hotel tax will be used to promote tourism, because Skeena is going to really, badly need it this year. . .

The Finance Minister noted how the issues related to the tax are ones that municipalities will have to discuss how they best wish to use it.

Most municipalities are saying that they're quite happy with the dollars that they have now. They're quite happy to spend them on tourism. They have a plan in place, and that's what they're going to carry out. That's perfectly fine. If there are communities that want to have that discussion with their tourism industry about utilizing it for housing, then we've opened the door to them, enabled, to have that conversation.

Mr. Ross also had questions related to the provincial governments approach to the Resource Benefits Alliance work from the Northwest.

I'm just trying to understand the relevance of $300,000 for the mayors to go out and to talk to stakeholders, including businesses and First Nations. Is there a relevant point to be had when talking about this $300,000 in relation to revenue sharing with the Crown?

We've certainly had meetings and opportunities through government to engage with the Northwest Resource Benefits Alliance. Their focus and their discussion, as the member would know well, was to produce a business case that proposes revenue-sharing. What we felt, when we had discussions with them and took a look at the business case, is that there was a need for broader consultation with the broader community to make sure that there was buy-in, to make sure that people felt that it was a broad plan for the entire region, as is being focused, to continue to do the good work and make sure that there was support across the community.

We felt that it was worthwhile work that they're doing, a worthwhile business case, and that they just needed to do a broader consultation to show buy-in from the entire region.

The Skeena MLA also raised the example of the existing agreement in the Peace River region of the province as a possible example for the government to follow,  with the Finance Minister noting that there are a number of models that could be examined when it comes to the Northwest inquiries.

I think we see that right now with, as the member mentioned, the Peace River trust. There's the Columbia Basin Trust. There are existing trust funds regionally that are also provided. So I think there isn't one-size-fits-all. It's part of the reason that we wanted to engage with the Northwest Resource Benefits Alliance because it gives an opportunity then, as the member says, to make sure that there's accountability as we go along in regular meetings — not waiting for a final report to be written a year from now and then wonder why they didn't necessarily follow reaching out or do the work that needed to be done.

That's why we're using the model that we're using. We're continuing to have those discussions. I think there is no question that if we see economic development occurring in the northwest, that that will benefit the region. There are taxation abilities already that are in place, so some of those benefits will automatically come because of economic development that occurs in regions

Is there a broader benefit-sharing agreement, as the alliance is talking about? I think that, again, is part of the conversation and part of the development of this report in the region that will assist government as we take a look at models that work in different regions and different parts of the province.

The discussion on the themes of the RBA can be found from the Legislature Video archive starting at the 4:10 PM portion of the proceedings.

Further notes related to the work of Mr. Ross at the Legislature can be found here.

To return to the most recent blog posting of the day, click here.
Posted by . at 12:03 PM

Email ThisBlogThis!Share to TwitterShare to FacebookShare to Pinterest
Labels: Questions from MLA Ross in Committee session on Finance estimates