The last seven days have made for a fairly successful week for the Nisga'a Nation, with the recent  Special Assembly bringing members of the nation together in the Nass Valley to review the plans of the Nisga'a Lisims Government,

As well, Friday also as heralded the announcement of a significant government to government financial arrangement between the Province and the Nisga'a when it comes to mineral resources in their territory.

The agreement with the Province which was completed last week, could bring over 8 million dollars in revenue per year to the Nisga'a Nation, is in addition to a benefits package that the Nisga'a reached previously with Pretivm Resources towards the development of the Brucejack Mine north of Stewart.

That agreement also delivers for education and training for Nisga'a citizens, sets employment targets and ensures that Nisga'a businesses have access to contracting opportunities.

Eva Clayton, the President of the Nisga'a Lisims Government noted the historic nature of the agreement, which came on the 18th anniversary of the Nisga'a Final Agreement.

“Bringing prosperity and self-reliance to the Nisga’a Nation is the first priority of Nisga’a Lisims Government,”  ...“We have developed a strong working relationship with Pretivm Resources Inc., and look forward to our continued collaboration on the Brucejack Gold Mine. On this historic day, the 18th anniversary of the effective date of the Nisga’a Final Agreement, we are pleased to once again affirm the Nisga’a Nation’s government-to-government relationship with British Columbia.”

The NFA is a document which has become a template for other First Nation discussions with both the Federal and provincial governments in the years since it was ratified.

For it's part the Province, through Scott Fraser, the Minister of Indigenous Relations and Reconciliation hailed the agreement as another step in sitting down with first Nations as true partners in economic development.

“Part of our commitment to a new government-to-government relationship with First Nations based on recognition of rights includes sharing the wealth from natural resource projects in the province,” ... “Together, we can improve the lives of people living in First Nations communities, and create a strong economy for generations to come, by sitting down with First Nations as true partners in economic development within their territories.” 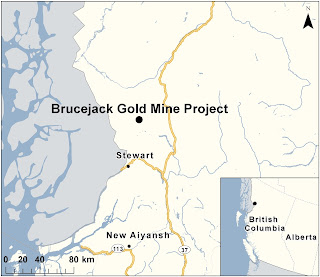 The Brucejack Mine which was commissioned in April of last year will provide for more than 300 jobs over the next 22 years of its anticipated life cycle. The latest update for the project was delivered on May 10th and offers a glimpse into production levels and the path ahead for the mine can be reviewed here.

The Nisga'a and Pretivm Resources, which operates the mine, reached a cooperation and benefits agreement for the project in 2015.

The Bruecjack development, is part of the growing mining sector in many areas of the Northwest, creating more opportunities for similar agreements for other First Nation governments across the region.

The full text of the announcement of the agreement can be reviewed here.

For more items of note related to the Nisga'a and the Nass Valley see our archive page here.

More items of interest related to the provincial government can be found from our Legislature Archive page here.

To return to the most recent blog posting of the day, click here.
Posted by . at 9:36 AM

Email ThisBlogThis!Share to TwitterShare to FacebookShare to Pinterest
Labels: Nisga'a Nation and Province reach agreement on Brucejack mine