Things are moving full speed ahead as workers at the Esquimalt Dry Dock look to make the Northern Sea Wolf ready for service on the Central Coast with a summer launch date in July now set for the former Greek ferry that was brought into the BC Ferry fleet last year.

The vessel which was built in 2000,  will accommodate 35 vehicles and 150 passengers and is expected to bring an influx of tourists to the Central Coast with service from Port Hardy to Bella Coola.

North Coast MLA Jennifer Rice and Premier John Horgan had an opportunity to tour the vessel as it gets its British Columbia makeover, with a few photos offering up a glimpse of the progress to this point. 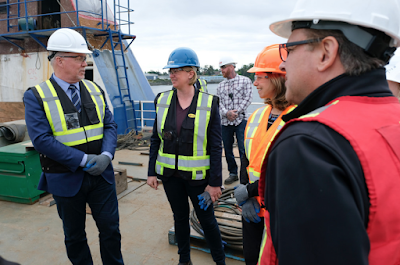 The latest update for the project from BC Ferries indicates a combination of a late delivery of the vessel to the Ferry Corporation and a bit more work required than originally anticipated to bring it up to Canadian and BC Ferries standards means that they will miss the opening of the 2018 tourism season.

Because of that delay, the service which will launch on July 20th will now be extended until October 11. Passengers who had booked passage on the vessel for dates prior to that launch will be offered the opportunity to use the Northern Expedition and Nimpkish service.

In addition to the renovation of the Greek vessel, the terminal buildings at Bella Coola, Ocean Falls Shearwater and Bella Bella are also in the midst of their own upgrades.

You can find more information about the plans for the Northern Wolf from the BC Ferries information page.

More background on Ferries related notes both for the BC Ferry Service and the Alaska Marine Highway can be found on our archive page here.

To return to the most recent blog posting of the day, click here.
Posted by . at 9:16 AM