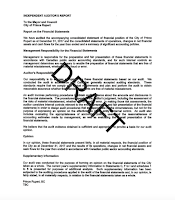 The document which is included for your review,  as part of tonight's Agenda package, provides a glimpse into the scope of financial notes related to the running of the City of Prince Rupert.

The release of the financial statements offers up a glimpse as to how the city approaches its financial work through the year.

Among some areas of interest from this years audit are:

Tax Revenues from Federal and Provincial sources outlined in Schedule 1 on page 29 of the Agenda notes, delivered the following returns:

Payments in Lieu of Tax

Grants in Lieu of Tax

Watson Island  gets its first mention on page 26, where its  noted that remediation costs to prepare the land for resale came to 1.8 million dollars and that there are 2 million dollars owing to the Ministry of Education and BC assessment Authority related to the property.

City management believes that  the current market value exceeds net book value, the Watson entry is also listed under Land inventory for resale, even though the City has decided to operate the land as a rental property of sorts.

The budget also indicates that 400,000 dollars in revenue for Watson Island Decommissioning Reimbursements were not realized in 2017 (schedule 4 page 32).

So far, the newly created city land instrument known as the Watson Island Intermodal and Logistics Park has yet to deliver much in the way of revenue to the city's coffers, though Pembina resources is still exploring its path forward for an LPG terminal at the site which would deliver some revenue to the city.

With the Ridley Island Tax agreement now of some concern for the City of Prince Rupert, the financial review notes that the District of Port Edward received $643,310 (Schedule 1, page 29) from Prince Rupert last year, an amount that the City would like to reduce significantly should the province agree with the City's point of view.

Those with a lead foot, or poor driving skills have contributed $221,032 to the city's coffers (Traffic Fines Schedule 3) a form of revenue that the City may wish to guard closely as the province offers up some thoughts on how perhaps some of the traffic fine revenues could be returned to the province.

The provincial gas tax fund also delivered $230,814 in 2017, which was below what the City had estimated. 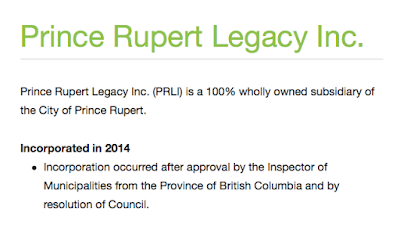 The fund has provided close to 1.4 million dollars in loans to the airport (page 48) with a long range repayment schedule listed to outline how that money shall be repaid at a 2.5 percent interest rate.

Legacy also provided $582,000 towards what is called Injection for Economic growth (Schedule 8.1), though there has not much in the way of background provided by the City as to what that money was allocated towards.

CityWest is also featured in the report, with Statement H on pages 22 and 23 providing for a line item related to the communication company's repayment plan for the loan provided to it by the City, back when it was introduced to the community as stand alone company owned by the City.

Schedule 5 on page 32 outlines how Employment levels both unionized and on city staff have seen a significant uptick in 2017. Along with the payment of salaries, the city's share of benefits that are part of those salary and incentive packages has increased as well.

The auditor's report also notes that the city has various lawsuits and claims pending by and against it. However, the opinion of management is that the determination of those claims will not materially affect the financial position, or the operating results of the City.

You can review the full report from the auditor as part of tonight's Agenda Package from pages 9 to 49.

Ms Bomben will introduce the document to Council as part of tonight's meeting at 7PM, Council members will have the opportunity if they wish,  to comment or expand on the the work of the auditor.

With the auditor's work on the record, the next items of note to watch for from the Finance Department will include the Statement of Financial Information which will provide a break down on the scope of the payroll for the city of Prince Rupert both for elected officials and those who work for the city and make over 75,000 dollars.

The list of suppliers for services for the City will also be released at that time.

And to make sure that the financial wheels continue to go round and round at City Hall, the City will soon begin delivery of this years Tax Bill, which should arrive in your mailbox sometime in early June with a deadline for payment in early July.

For more items of interest related to the city's financials see our archive page here.

A look at Tonight's City Council session can be explored here, while a wider overview of Council Discussion topics can be found here.

To return to the most recent blog posting of the day, click here.
Posted by . at 11:57 AM