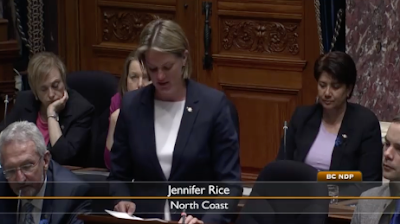 Officials across much of British Columbia continue to keep their eyes on River and Lake levels across the province as well as the rapid snow melt from mountain areas, with many communities already facing flooding situations or preparing for the potential of rising water.

On Wednesday afternoon, North Coast MLA Jennifer Rice, the Parliamentary Secretary for Emergency Preparedness provided an update on the work ahead for Provincial emergency response workers and outlined where the province has deployed its resources to address flooding emergencies.

In her report for the Legislature, Ms. Rice noted that the latest numbers indicated that There are nearly 2,000 properties under evacuation order and another 3,000 under evacuation alert, due to freshet and flooding events across B.C.

As for the provincial response to this point, the Parliamentary Secretary delivered a list of the resources deployed and the release of funding for disaster financial assistance.

We've made disaster financial assistance funding available to those affected in the regional districts of Kootenay-Boundary, Okanagan-Similkameen, Central and North Okanagan, Columbia-Shuswap, Thompson-Nicola and many areas in the Cariboo. We are making this funding available to help residents, local governments and First Nations rebuild so that they can rebuild the process of healing.

We've deployed over two million sandbags to local governments, to protect homes and public infrastructure. We've provided a total of 12 sandbag machines to Cache Creek, Oliver, Vernon, Willowbrook, Kelowna and Prince George. Over 300 B.C. Wildfire Service firefighters have been deployed to assist with sandbagging throughout B.C.

We have additional resources ready to deploy to Prince George, Kelowna and Chilliwack, in support of communities in the path of expected high waters. We're working with local governments to protect communities and are monitoring the increased risk closely.

In the Northwest, officials are still keeping a watch on the Bulkley Valley rivers systems which are currently under  Flood Warning, while the latest data provided from the Rivers Forecast Centre suggests that the Skeena River system is not facing a flood risk at this time.

The most recent update from the Rivers Forecast Centre can be reviewed here.


More items of note related to the MLA's work in the Legislature can be found on our Archive page here.

To return to the most recent blog posting of the day, click here.
Posted by . at 8:39 AM

Email ThisBlogThis!Share to TwitterShare to FacebookShare to Pinterest
Labels: Flood notes for mid May