Middle School renovations will start with a roofing project 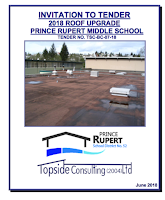 While the long range plan still would appear to be that of replacement of the Prince Rupert Middle School, the shorter term prospects include some renovation work on the existing building, with the first stage looking to be the replacement of the building's roof.

School District 52 has posted its Request for Bids for the 2018 Roof Upgrade, issued on May 23rd, the nineteen page document outlines the expectations by SD52 for those that may be inclined to submit a proposal.

The School District will be hosting a mandatory site inspection on June 5th at PRMS to provide contractors with a view of the scope of the work required.

The deadline for submissions of bids is June 13th.

You an review the full bid documentation from the BC Bid website.

One year ago, North Coast MLA Jennifer Rice had made the condition of the Middle School and the need for replacement of the building one of her main election issues for the election campaign of 2017. 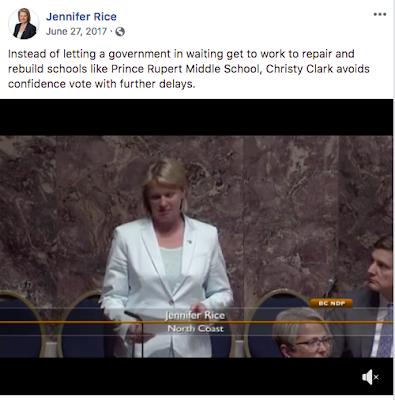 Though since being returned to office and now as part of the Government of the province, the theme of replacement for the aging building housing students from Grades 6 to 8 has not made for quite as many conversation topics through her social media pages of Facebook or twitter. or through her constituency website.

In April, Ms. Rice noted that the province is still working with the School District to complete a plan for replacement for the existing building.

MLA Rice pointed out that, despite funding going to Prince Rupert Middle School for upgrades, the Province still intends to replace it as soon as possible. “We’re still working with the School District to complete a plan for replacing the school. Until everything is in place, the old school needs to fix its deficiencies in order to keep operating.

Some of the history of the Middle School as  political issue can be found here.

An overview of the North Coast MLA's work at the Legislature can be reviewed here.


To return to the most recent blog posting of the day, click here.
Posted by . at 11:23 AM

Email ThisBlogThis!Share to TwitterShare to FacebookShare to Pinterest
Labels: PRMS roofing project out for tender