While the theme of Sunday's Cross Country Check up program was that of First Nations resource development, the show also delivered an increased profile for John Helin, the Mayor of Lax Kw'alaams, one hour north of Prince Rupert.

Mr Helin, became the go to guy for many of the elements of host Duncan McCue's two hour review of the topic, and for those who live outside of the First Nations community that is found north of Tuck Inlet, Sunday's conversations with the CBC host may have made for the first real review of what direction he plans to take his community towards in the years to come.

His opening remarks for the program provided a fairly concise overview of how he views the prospect of economic development for his community and what those that are approaching the Band Council should keep in mind as they look towards joint projects with the Band.

"It's important to come into the community and understand who we are, we have one of the biggest communities in BC as far as band members on our list, over 3800 and most of them live in Prince Rupert so it's important to understand who you have to deal with and let us do our job so that we can go to our membership and get that information to them so they can understand what is being proposed. And to keep in mind that environment is always at the top of the list for any proposed development in our traditional community"

When it comes to media appearances, Mr. Helin's exposure on the North Coast has been somewhat limited, so it was with interest to listen in to the Sunday broadcast of the long running the national call in show, as the Mayor reviewed a range of economic, social and governance issues that make for conversation for the Lax Kw'alaams Band membership.

The theme of the oil moratorium claimed some of the spotlight, with the Lax Kw'alaams one of a number of First Nations in Northern British Columbia that have outlined some concern over what they have called a lack of consultation as that moratorium bill worked its way through the House of Commons and now into the Senate.

That lack of consultation led to the Lax Kw'alaams Band to take the issue to court earlier this year,  with the court document highlighting the difference between the relatively easy access to North coast ports, compared to the more congested options of the Lower mainland.

Still, while the Sunday program highlighted some of those issues, there was little to be heard related to a proposed oil pipeline proposed by Eagle Spirit Energy, which has previously expressed an interest in developing an export terminal near Lax Kw'alaams.

That is a proposed project that has gained some significant media attention in recent months as the Kinder Morgan story continued to dominate the headlines, the Eagle Spirit proposal one that some suggest could make for another option for the Alberta oil industry for the future.

The Band's court efforts have been criticized by many who want to ensure that the oil tanker moratorium is put in place with few delays, while any plans for  an oil pipeline project or LNG development will probably make for some lightning rods as they further evolve.

During his stay on the North Coast the CBC's Duncan McCue found a range of interesting resource related areas to review many of them initiatives from Lax Kw'alaams,  putting the focus on them here.

Among some of the areas explored was the work of the Lax Kw'alaams when it comes to the Northwest Forest industry, with the Band having purchased the old Skeena Cellulose timber rights in the region, with the Industrial Park's Tidal Coast Terminals the main shipment point for logs for export.

That has made for a controversial topic for many in the province over the years, but the work in the woods is providing for jobs both for members of the band and residents in Prince Rupert working at the terminal and servicing the ships that arrive.

The fishery also remains an important aspect of the Lax Kw'alaams economy as well, with the fish plant in the community serving as one of the economic drivers for the Band since it reopened back in 2012.

Mayor Helin however, also outlined some of the serious issues facing the fishery and how the Band Council needs to ensure that all options for development and employment are explored.

"In my community I have the biggest gill net salmon fleet on the coast, 70 plus gill netters that can't make a living anymore because of a lack of fish, or regulations imposed on us by the Federal government. So we have to draw a line in the sand somewhere saying enough is enough, don't impose stuff on us and talk about reconciliation and self-determination all these nice words and cutting off something that would be very helpful for us going forward"

LNG also has started to edge back into the conversation as well, with Mr. Helin acknowledging that it is still a controversial topic for his membership, but adding that should a proposal come forward for the community he would take it to the membership, providing that concerns for the environment are part of the discussion.

However, not everyone is on board with some of the plans that the Lax Kw'alaams are putting forward, as was apparent during the CBC program and a topic that the Mayor also addressed.

"You know we have this romanticized view about how we all got along in the past ... it's just not true. I was elected into my position to represent my people the best I can and that's what I'm doing. And I don't want my dirty laundry in the public, we've all got our problems in our communities, whether its hereditary, elected and dragged into court cases is the last place I want to be.

So how do we move forward, when we have those battles within our own communities and people purporting to be somebody they are not  and it's real, we have NGO's that come into this atmosphere and divide us and they're good at it ... So I don't go into Haida Gwaii and tell them how to do the business in Haida Gwaii and I don't expect somebody to tell me how to do it in my traditional territory, so it's getting the right information out to your people"

An additional issue is the nature of how the community is consulted and kept up to date on the progress of large scale projects.  And on that theme the Band officials will have to watchful that they do provide for the level of consultation that their members wish to see, particularly when it comes to the prospect of an increased industrial footprint in their community.

Mr. Helin addressed some of those notes, recounting some of the recent debate over the prospect of LNG development on the North Coast.

"I want to respond to some of the comments that were made. A little bit of history about me and my band, I was elected into my position in the middle of the controversy for the LNG project that was proposed up here, and it wasn't easy for me to be put into that position. You talk about people saying No to it, it was in a meeting like this, where people didn't have the information before the meeting and the controversy wasn't LNG it was the site of the proposed tanker dock.

So what I had to do was get experts in fields that had no bias, bring them together and go out to our membership in meetings like this,  where we advertised it and had a lot of participation. The meetings took place, we sent out information to all of our members just like a regular election and put that information out to them and then had a referendum after that." 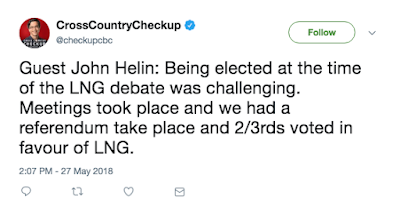 Overall, the two hour national radio program over the weekend did showcase the growth and future ambitions for Lax Kw'alaams and highlighted just how large a player they have become as part of the North Coast's industrial base.

It also served to raise the profile of the Lax Kw'alaams Mayor, who through those Band decisions is becoming one of the architects of a changing economic foundation on the North Coast.

For those that missed the program, you can listen to the CBC Cross Country Check Up podcast here.

You can review more items of note from Lax Kw'alaams from our archive page here.

To return to the most recent blog posting of the day, click here.
Posted by . at 10:27 AM