North Coast MLA Jennifer Rice remained focused on the flooding issues in the province at the moment, drawing the attention of the Legislature to ongoing risks associated to Climate Change and the need for Risk Management procedures to address the issue.

Making use of a document from the United Nations Office for Disaster Risk reduction, the Parliamentary Secretary for Emergency Planning observed how the province remains vulnerable to natural hazards with the need to adopt a long term approach to emergency planning.

Factors such as climate change are increasing B.C.'s vulnerability to a number of natural hazards, such as wildfire, flooding and landslides. If B.C. is to become more disaster-resilient, we need to collectively understand risks more fully; guide and coordinate the efforts of governments, including First Nations, partners and the public more effectively; prevent and reduce risks proactively; and prepare for robust response and recovery efforts.

These needs align with the four priorities identified in the UN Sendai framework document for which Canada is a signatory. The importance of addressing all phases of emergency management — mitigation, preparedness, response, recovery — and involving all partners are two of the concepts that are central to the United Nations Sendai framework for disaster risk reduction. ..

This document sets out an all-of-society, long-term approach to reducing the impact of disasters. It sets out a practical and evidence-based system that involves the following priorities: understanding risks, strengthening disaster risk governance, investing in risk reduction, preparing for effective response and to build back better in recovery.

The UN sponsored Framework was adopted by the UN in March of 2015 and features seven Global Targets and Four Priorities for Action.

The background to the Framework can be examined here, while the UN Office for Risk Reduction also identified Four priorities for Action.

The full text of the Framework can be downloaded from the UN website here. 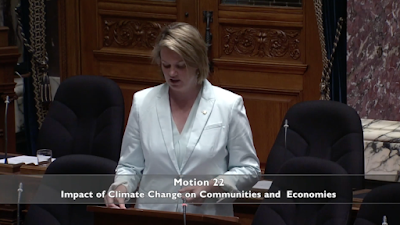 Returning to the current situation facing a number of areas of the province, Ms. Rice made note of the current snow pack levels in the province and the impact that the warming weather is having and the prospect of historic high river levels to flow over the course of the next two weeks, the Parliamentary Secretary for Emergency Planning suggested that adopting a disaster risk framework such as the UN framework would provide for better preparation for the province.

Adopting a disaster risk reduction framework, such as the Sendai framework, here in B.C. will help us better prepare for and mitigate the costs of climate change on communities and our economy.

He presentation to the Legislature can be reviewed from Hansard's Monday morning notes starting at 11:45 AM

For more items related to her work at the Legislature see our archive page here.

Email ThisBlogThis!Share to TwitterShare to FacebookShare to Pinterest
Labels: Rice on ClimateChange and BC flood situation