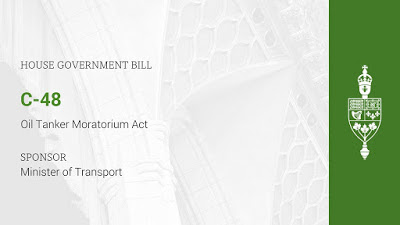 The Federal Legislation that would put  in place ban on oil tanker traffic on the North Coast has navigated the always choppy waters of the House of Commons and now is set to head on to the Senate for the Upper Chamber's second review.

The path from introduction by Transport Minister Marc Garneau through to the delivery of the Bill to the Senate can be traced through the Open Parliament website, which provides a wealth of information related to the parliamentary process and the travels of the legislation to this point.

The full text of the legislation can be found here.

The scope of the Federal plan to ban oil tanker traffic can be reviewed through the map below which highlights the area that will be placed under the control of the ban, should it move through the Senate towards final adoption. 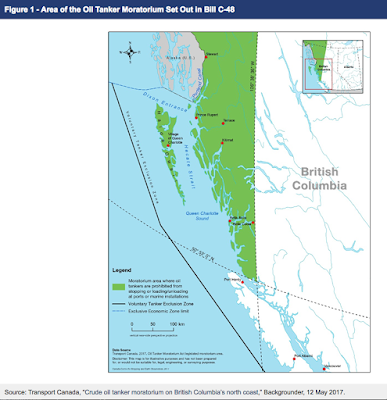 Skeena-Bulkley Valley MP Nathan Cullen made note of the progress through his Social Media feeds on Wednesday, providing a short shout out to the success of the initiative to this point

The Bill, known as C-48 has seen some opposition come to the forefront of late as it got closer to the final days of debate in Ottawa, including a number of First Nations in Northern British Columbia and Alberta who have increased their involvement in order to stop the progress of the bill.

Among the list of groups and individuals expressing concern over the proposed bill was Lax Kw'alaams Mayor John Helin, who spoke last week in Ottawa to highlight what he says has been a lack of consultation on the issue from those that will be most affected by the ban.

Lax Kw'alaams has also filed a suit in the Supreme Court of British Columbia against the tanker moratorium, one of what could be a number of potential legal moves that those with concerns over the Federal ban and how it has been adopted have plans to follow up on through this year.

One such initiative, the Chiefs Council against Bill C-48 has been raising money through a Go Fund Me initiative over the last five months, having reached close to the half their target of 100,000 dollars to this point.

Their most recent update of seven days ago, makes note of the Lax Kw'alaams court filing, as well as the progress of the Federal legislation through the House of Commons.

The Chief's Council's Go Fund Me page, spawned a competing petition from those who continue to advocate for the ban to move forward, an online project which included the participation of the Prince Rupert Environmental Society.

In March, Eva Clayton, the President of the Nisga'a Lisims Government outlined how the proposed ban could hurt the Nisga'a people, providing her commentary through a Vancouver sun editorial page submission.

The President's essay included a passage that brings home the theme of how the ban could impact on the First Nations of the Northwest and their quest for economic Independence.

"This bill offends the spirit of our treaty with Canada and B.C., which commits all parties to work towards greater economic independence for the Nisga’a people."

All of which suggests that while the Federal Government and Skeena-Bulkley Valley MP are celebrating the progress to date and beyond the Senate overview to come, there may yet be some clouds on the horizon before the ban goes into effect.

The media review of yesterday's successful journey through the House of Commons for the Legislation can be found below:


For more items of note related to the Federal scene see our House of Commons archive page here, while a wider overview of events in Ottawa can be found on our D'Arcy McGee portal.

Email ThisBlogThis!Share to TwitterShare to FacebookShare to Pinterest
Labels: Tanker Ban bill moves on to Senate