As the fishery faces more challenges, some members look for their union pension payout

An interesting look at some recent history of the North Coast Fishery can be be found on the pages of the UFAWU Facebook page these days, part of a response to the membership who have apparently been making inquiries about gaining a pension plan payout owing to the lack of work and dwindling opportunities of these current times.

In a lengthy review of some of the past union battles for better working conditions, UFAWU-Unifor's Joy Thorkelson notes of the many recent inquiries to the local office related to a "Union Payout" towards the pension plan which was a union victory from the 1989 strike in the BC Fishery.

Ms. Thorkelson surmises that the surge in interest in the payout has come as the workers of the North Coast fishery find little work available these days, that after the end of canning operations at Canfisco's George Hills way facility and other major changes in the local industry.

The Facebook notes trace the history of the creation of the pension plan as well as some of the other improvements that the union negotiated for during the days when the fishery was the main industry for the region, as well as to catalogue the many issues that UFAWU-Unifor continues to work on in current times, including engagement with EI officials on behalf of the membership as well as the advocacy for the fishery with DFO that the union engages in through the year.

The UFAWU-President makes note of the costs associated with keeping a union operating and laments to a fashion, as to how the industry has changed over the years, shrinking in membership from the days of the past, while noting that the union continues to seek better contracts for their shore workers.

There is also an additional observation as to how Fishermen no longer bargain, or strike for better prices,  a sign of the shift in focus that the fishery and the union has seen as the companies restructured their operations, or ceased to operate completely over the last decade.

To operate a democratic Union, it takes money. Members pay dues, and from these dues, the Union pays its bills. Negotiating contracts, solving problems, helping people with EI, taking DFO on – all this costs money.

The UFAWU is still negotiating to get better Contracts for our Shore members. Fishermen have chosen to no longer bargain or strike for better prices. Our industry is tiny now, and the Union spends most of its time trying to get more fish for fishermen and to keep processing work in BC. -- Some themes from a recent Facebook entry for members of UFAWU-Unifor on the North Coast

Much of their UFAWU-Unifor website explores those issues now, you can review some of the latest themes here. 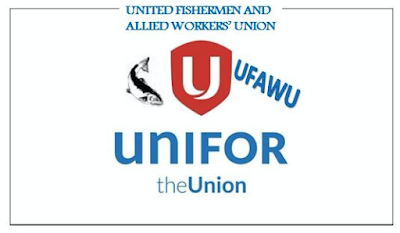 Heading into the summer of 2018 the union is putting a main push towards advocacy for workers, seeking to bring home the message for federal officials of the need for more employment opportunities for those on the North Coast and how fish that is caught in Northern waters should be processed in northern BC plants.

With the North Coast facing what may be another summer of expansive fishery closures, the prospects for many of those who rely on the resources from the ocean for their employment hang in the balance, with the potential ahead that what little work has been directed to the local plants to this point may soon dwindle even further

For a wider overview of the many challenges facing the North Coast Fishery these days see our archive page here.
Posted by . at 9:24 AM

Email ThisBlogThis!Share to TwitterShare to FacebookShare to Pinterest
Labels: UFAWU update for members