It now is the undisputed engine of the Northwest and Northern BC economy, the shipment point to the Asian markets and the Gateway to Middle America, the Port of Prince Rupert has come a long way in its 40 years and perhaps is if not there, now very close to that ancient vision of Charles M. Hays.

The Port of Prince Rupert celebrated its fortieth anniversary in March, featuring a look back to its past, but more importantly looking with enthusiasm towards its future.

In a local economy that has suffered many hits over the last few decades, from the death of the pulp and sawmill industry to the serious decline of the fishery, the Port of Prince Rupert has provided for the majority of the positive economic news of that same period.

The introduction and proposed growth of container services, to the growing expanse of Ridley Island with both coal and grain facilities has provided the spine for the local economy in the transition period from old industrial development and the new horizons ahead.

The prospect of perhaps a potash terminal and continue talk of an LNG facility for the north coast are but two of the percolating developments for the region.

The tourism sector gets a reboot this year as the Port retrenches it's cruise ship strategy, with hopes of rebuilding the local brand moving forward from the disappointment of recent cruise line withdrawals. 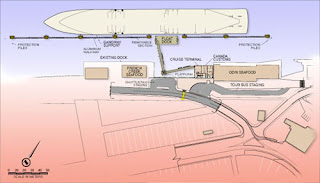 The process for all facets of port development at times seems glacial for many, the bounty of jobs not quite delivered yet, the expansions and vision for the future still to move forward, yet for the city, the region and the northern half of the province, the Port of Prince Rupert is the key building block for economic development across the Highway 16 corridor.

The celebration of the Ports progress was reviewed from a variety of local media, their accounts of the Port at 40 can be found below.

Email ThisBlogThis!Share to TwitterShare to FacebookShare to Pinterest
Labels: Port of Prince Rupert at 40