They'll be working on the rail road 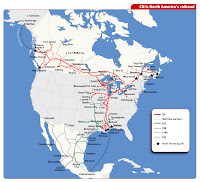 CN is certainly bullish on the future of the Northwest, the railroad which serves the Port of Prince Rupert recently announced plans for an ambitious expansion of its rail network along the Northern corridor.

CN has plans to create a number of lengthy sidings along the northern route, to better move the volume of traffic that is using the Port of Prince Rupert as a shipment point to overseas markets.

The 155 million dollar project will create five sidings to better move product along its network, a continuation of a process that has created some 21 sidings since 2004 along the northern route in Alberta and British Columbia.

And with the new sidings it seems will come longer trains, utilizing modern technology aboard CN's growing fleet of engines.

CN describes the new sidings as creating  the opportunity to "increase the fluidity of operations in this major CN corridor and allow us to haul increased volumes in safer, more efficient trains equipped with distributed power (DP) technology."