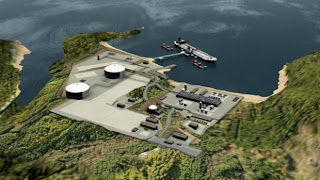 Back in the mid 1980's Dome Petroleum had grand designs for shipping Liquefied Natural Gas to Asian markets, plans that were rendered historical with the demise of that energy player.

Now, some thirty years later the prospect of LNG tankers calling in at Prince Rupert may yet see the light of day.

Two proposed developments for Prince Rupert are getting more and more attention these days, the latest one involving one of Asia's largest players in the energy world.

Petronas, Malaysia's state owned oil and gas company recently struck a deal to acquire a Calgary Energy company, Progress Energy Resources Corporation, with that announcement Petronas also indicated that it would seek to ship Natural Gas out of a shipment terminal in Prince Rupert.

Petronas would build and use a terminal on Lelu Island near Ridley Island, with an anticipated completion date of 2018.

The Petronas announcement comes after the British Gas Group announced its own desire to ship liquified natural gas out of Prince Rupert.

Prince Rupert is facing stiff competition for industrial development from Kitimat, which has also seen a string of LNG related developments proposed over the last year.