Port of Prince Rupert on the American radar (again)

As the American economy continues to struggle, the siren call of protectionism seems to be getting louder and louder from below the 49th, with one of the prime targets of American legislators seemingly the success of the Port of Prince Rupert.

An American federal agency (The Federal Maritime Commission) has been keeping itself busy these last few months investigating concerns of American ports and stakeholders into the business plans and practices of their Canadian and Mexican competitors. 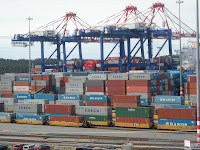 The twin West Coast ports of Vancouver and Prince Rupert have been the focus of their investigation, with particular interest expressed into the surge of success from the Northwest Gateway to the Pacific.

On Tuesday, the Five member commission voted in favour of the critical report,  by a total of 3-2 the Commission members found enough items of concern to approve the report that has been rejected by Canadian officials.

Of interest in the current climate of International relations, the Commission voted along party lines, with the Democrats voting in favour of the report, the Republicans against. A growing instance of the Democrats using Canadian issues as items of concern to the government.

The current tempest came to the boil after two Washington State Senators raised the concerns of their local ports regarding Canadian practices, which they suggest include unfair subsidies. In particular, Senators Patty Murray and Maria Cantwell expressed their concerns over the success of the Prince Rupert Port.

From that discussion came the current investigation, which beyond the subsidy issues has now raised the always tension packed issue of security. With some Commission members expressing worries that cargo that flows through Prince Rupert isn't as secure to America as that from other Canadian ports, a charge that has been rejected from the Canadian side and in fact was rejected by a member of the Commission.

The simple math of it all suggests that it's the volume of traffic that has started to flow through Prince Rupert that is the real issue for the Americans, all other topics of discussion just the framing of that fact.

And when times get tough anywhere, the first thing that tends to happen is that protectionist practices rear up their head.

Such is the case today and it will be worth watching to see how the Commission's report, to be delivered today resonates in an America that is struggling economically these days and what impact that it could have on the Port of Prince Rupert's growth and plans for further expansion.

The Commission Report can be found below:

Some of the background on the Commission report and the issues leading up to it can be found below.