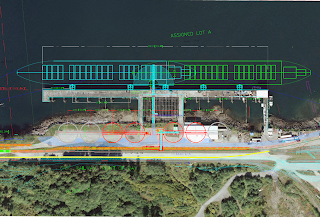 The latest proposal for waterfront development is proving to be a contentious issue for residents on the West side of the city, as the Pinnacle Renewable Energy Group's plans for a pellet terminal and storage facility provides for a vocal debate over what should, or should not be developed on the Prince Rupert waterfront.

Pinnacle's plans as outlined in a comprehensive prospectus, would provide for a storage facility and shipping terminal along the shoreline near where Prince Rupert's grain elevator once stood, providing for the first real industrial use of that are since Prince Rupert Grain relocated to Ridley Island in the eighties.

It's perhaps because of that absence of use that has provided for an attachment to that section of the waterfront, residents on that side of town, having had little industrial development take place until the recent rejuvenation of Fairview terminals into what is now the container port.

Since then, the volume in both numbers and audial content on the waterfront rail lines has caused for controversy on the west side, residents weary of train horns tooting and rail car couplings coupling and all of that.

Now, much to their horror it would seem the prospect of yet more development on that stretch of waterfront is sending some of them to the verbal barricades as it were.

The debate which at times gets heated, offers up any number of potential problems that opponents can think up, some of which may or may not be grounded with actual proof. The scope of the argument ranges from health concerns over potential pellet dust, to property value declines, though in the latter category, some of the opponents perhaps have an over inflated view of their property values.

Many of the concerns are listed on a webpage called Pellet Free Neighbourhood, where opponents of the project list their talking points on the issue.

Based on the idea that the city is now a major shipping port,  those opponents may not be on the firmest ground on the debate, with the planned expansion of the Container port the rail corridor along the waterfront will remain as a marshalling yard for the foreseeable future.

Likewise, if historic precedent is any benchmark, the area in question with the Pinnacle proposal is indeed industrial, so it shouldn't really be a surprise that it would return to it's original use as opposed to the waste of scrubland it has become of late.

As it seems at the moment, the waterfront appears to have been divided into sections, the area from Kwinitsa to the east a more resident friendly space, the walking trail, the parkland, the cruise terminal and the Cow Bay redevelopment plans making it the destination for leisure and public use.

West of Kwinitsa, is for the most part a marshalling yard for CN, much of the land yet to be reclaimed for any other use from the historic fire on the waterfront of the seventies, the further you move towards Fairview the concept of it still being industrial seems still quite viable.

The City, as seems the case of late in anything contentious, appears to want to sit on a fence waiting for the winds to blow one way or another, offering up little evidence that it is fully committed to bringing any new industry to town.

The City recently issuing a call for input on the waterfront development, though we're not sure exactly how that would impact on the Port of Prince Rupert controlled space, which the city probably has little input or control over, other than offering up helpful suggestions.

Considering the city's less than solid financial footing these days, with a tax base that has declined over the last decade, one would think that the city would have an opinion or two on development and be inclined to welcome the same, at some point it would be seem that the city is in need of the growth and the benefits that could come from that.

Prince Rupert being a port city will either move forward based on the strength of its position in the world of shipping or it will stagnate again, the Pellet plant proposal would appear to be sending a message of confidence in the future as a shipment location.

The key to the financial well being of the city is to create an atmosphere of further development, sometimes that means that hard decisions and opinions have to be made and eventually accepted.

The file on the Pellet Plant proposal grows by the day, some of the reviews can be found below.