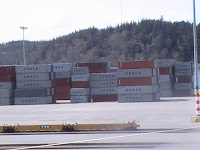 The success of the Port of Prince Rupert has not escaped the gaze of American politicians, with levels dropping (and unemployment rising) at some key Western US ports, the backlash against Canadian competition has continued on, with a review from the American Federal Maritime Commission still working towards its final deliberations.

While that study continues on into the evaluation phase, one former chairman is offering up her solution to the concerns of the US port stakeholders, that being a Modified Harbour Maintenance Tax to be assessed on all freight from foreign sources that enters the USA.

With the US economy still struggling and unemployment a concern heading into an election year, the prospect of job protection may very well prove to be too enticing a solution even if it becomes the opening shot in a renewed trade war with Canada.

The suggestion from Ms. Bentley is providing for some fodder for debate on the topic of free trade between Canada and the US, an issue which could have ramifications for the Port of Prince Rupert's container operations in the years to come.

Northern View-- Former FMC Commissioner supports imposing fee on cargo entering US from Rupert port
Northern View-- Industry and Government weigh in on 'unfair' advantage of Prince Rupert Port
DC Velocity-- The brewing battle over the HMT
Lloyd's List-- Call to tax all US bound freight
Posted by . at 8:37 AM