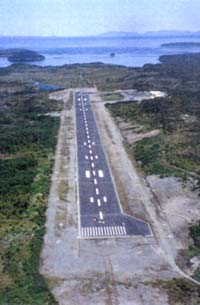 Travelling to the Prince Rupert Airport sometimes appears to resemble an out take from that legendary John Candy  movie, Planes Trains and Automobiles, the Rupert version perhaps, Bus, Boats and Planes.

Regardless, it's a major logistical adventure just to get to the airport from downtown, but of late that is only where the problems begin, as the Northern View outlines, maintenance issues on the de-icing equipment at Prince Rupert Airport have resulted in flight cancellations over the last few weeks.

The most recent cancellations follow on the heels of  a Christmas holiday problem that left many travellers frustrated as a Prince Rupert bound flight had to be diverted to Prince George owing to troubles clearing the Prince Rupert runway of snow.

The incidents while usually rare (despite the recent problems Prince Rupert still appears to have less delays and cancellations than elsewhere in the Northwest), seem to be piling up as 2012 progresses, something that is frustrating travellers and perhaps providing for a performance level black eye for the local airport.

While the use and maintenance of the de-icing equipment is contracted out to the transportation provider there, the simple fact is, if the flights are delayed or cancelled completely it's the image of the Prince Rupert airport that suffers the most.

Considering the marketing plan of the Terrace airport is to place it in the minds of travellers as the Northwest Transportation hub, the ongoing issues at the Prince Rupert Airport may be inadvertently adding to that impression that Terrace is morphing into the hub.

The Prince Rupert Airport Authority might want to sit down with its transportation partner sooner rather than later to sort out all the maintenance and equipment problems, lest the travelling public migrate eastward on their own.
Posted by . at 10:58 AM