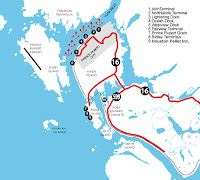 So far around the Northwest, Kitimat has been in the lead in this competition, the Premier looking to place at least three or maybe more LNG distribution sites into the Northern end of Douglas Channel, one project is already well into the planning phase, setting up a base of operations on Haisla land in the Kitimat region.

Prince Rupert, seemingly not wishing to be left out on this potential gold rush of shipments to Asian markets and beyond is now on the shipment map.


This is not the first time that the prospect of an LNG export terminal for the Prince Rupert region has been suggested, going back to the mid 1980's there was talk of Dome Petroleum building such a shipment point on the north coast, more recently in 2006, West Pac Terminals floated the idea of a Natural Gas export terminal for Ridley Island.

Before Prince Rupert residents get too far ahead of themselves however, they might be best served to keep in mind the following quote from the folks of BG Group, the proponents of the latest Prince Rupert option.

"But though the company said its interest is real, it has no imminent construction plans."

Reviews of the Premier's plans and the potential  hurdles still ahead were found a plenty over the last few days, some of the highlights can be found below.

Email ThisBlogThis!Share to TwitterShare to FacebookShare to Pinterest
Labels: BC LNG plans and Prince Rupert