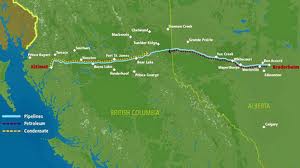 The proposed Northern Gateway pipeline project, subject of a bit of discontent for some segments of the North coast population base was the main focus of a two day session of the Enbridge Northern Gateway Joint Review Panel held at Prince Rupert's Chances convention centre.

Coming a week after a high profile protest march through the city by opponents to the Northern Gateway project, an event that has now become  a viral event on YouTube, if nothing else the Enbridge corporation would learn after the weekend sessions that their opponents on the north coast are well organized and have recruited a sizable collective to express their determination to block any prospect of a pipeline across Northern British Columbia

The two days of session on Friday and Saturday provided for a number of presentations on the project, the vast majority of them against the plan by Enbridge energy to ship bitumen through Kitimat, via a pipeline from Alberta's tar sands to the coastal community.

The main thrust of the Prince Rupert interventions was the prospect of oil tankers plying the north coast, whether calling in Kitimat or,  as in an idea floated earlier in the week by Enbridge through Prince Rupert, with a good number of the presentations provided by members of the local fishing union UFAWU, led by city councillor Joy Thorkelson.

As well as the city councillor, presentations were made by local NDP politicians, Gary Coons the local provincial MLA and Nathan Cullen, the federal NDP Member of Parliament and current NDP leadership contender. The latter making good use of the forum to reinforce his environmental profile on the larger stage.

Enbridge's participation for the most part was limited to observation and to receiving the oral presentations against their plan, which by the end of the first day alone, probably left their team to more than likely realize that they weren't going to win over their audience on their talking points.

Controversy seemed to dog these sessions even before they began, Mr. Cullen made much about the attempts to limit the participation in the debate, a theme that some took up as an attempt to muzzle the MP, which probably is not quite correct owing more to the need for time management of the panel review, but the impression that he somehow had seen his participation reduced seems to have become the conventional theme post discussion.

Even before the sessions opened up a microphone, one would be participating group had pulled out of the proceedings, with the Lax Kw'alaams Band announcing that they would not participate in the proceedings.

Once the actual two day sessions were underway, more controversy arrived, this time in the form of a mis-step by the moderators of the discussion, who made a rather serious error in having a First Nations participant, a drummer dressed in traditional regalia from Metlakatla barred from the proceedings, that after the participant had objected to the the course of discussion on Mr. Cullen's speaking time, reportedly shouting in frustration before leaving.

Over a period of time in the proceedings the drummer was allowed to return, but that original expulsion seemed to taint the remainder of the proceedings, with many of the participants making reference to it prior to their own presentations on the theme of the sessions.

As the session came to an end on Saturday, it would be an understatement that the general impression of the presentations was that there was no support for the project among those who had lined up to speak over the two days.

Something that one imagines should not come as a huge surprise to Enbridge, which if it didn't know by now, will have quickly learned after this weekend that the hill to push that rock up is going to be a rather steep one.

After but one session of the tour of protest, Enbridge is already hearing echoes of a debate from the past, that of the Mackenzie Valley pipeline, which in name was approved but in reality has still yet to ever actually make it past much of the planning stage, some three decades later.

It's perhaps a similar battle ahead for the folks at Enbridge, as outlined in the Globe and Mail by Tom Flannagan, who once was a power broker within the old Reform party and now sits in Calgary as an observer, commentator and educator on Western Canadian issues.

On the topic of the Northern Gateway, Flanagan sees many similarities between the Mackenzie Valley debate and the current topic of concern across northern British Columbia.

Flanagan was not alone in his observations of the current state of debate, the Los Angeles Times featured this article in its weekend edition, with a prominent spot on its opening page to the paper's website.  The article looks at the Northern Gateway as a form of defiance against the U. S. and its foot dragging over the Keystone pipeline, it touches on the controversial nature of the Northern Gateway in British Columbia, but it's not the full focus of the article, which offers up more than a few controversial themes of its own.

As for the local and national reviews, for the most part the sense of controversy and strong opposition to the project was the main thrust of the majority of the articles and media contributions, the majority of which you can examine below.