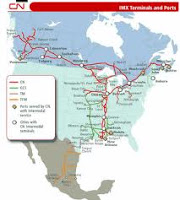 A derailment on the CN line near Telkwa on Tuesday afternoon has taken 46 coal cars off the tracks and closed the line between Prince Rupert and Prince George until at least midnight tonight.

The train which was bound for the Ridley Terminals, left the tracks around 2 PM on Tuesday, no injuries were reported and there is no environmental risk according to CN.

CN issued this statement to its website outlining the scope of the derailment.

CN Rail workers are currently on the scene of the derailment to determine the cause and effect the clean up, the line closure will affect both freight and container shipments to the Port of Prince Rupert as well as passenger services through Wednesday.

Update (Feb 23):  CN advised on their website that the site was cleared as of 0330 AM PST on Thursday, with only minimal delays anticipated as service resumed.
Posted by . at 10:29 AM

Email ThisBlogThis!Share to TwitterShare to FacebookShare to Pinterest
Labels: CN derailment in northern BC