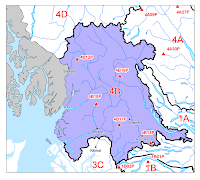 It may be a bit too early to tell just yet, but the Northwest may be in for another interesting year of flood levels, perhaps to bring back memories of a few years back when rivers of the Northwest overflowed their banks at record levels.

The Rivers forecast centre posted a look ahead to the spring melt months and with near record amounts of snow currently atop Northwest mountains, the prospect of flooding in the Northwest is something that the centre has its eye on.

Weather over the next few months will be the determining factor as to the risk of flooding, higher temperatures will speed up the snow melt and precipitation levels through the spring could provide additional concerns for forecasters.

The Terrace Standard explains the various factors being taken into account by the Rivers Forecast Centre as it watches the snowpack and the effect that it may have on communities at ground level.
Posted by . at 8:44 AM