The confusing string of events of the last 24 hours in the territory of the Gitxsan Nation has taken another turn, as it appears that Canadian National has shifted their concerns over any further blockade attempts on the rail line to the Supreme Court.

Radio Station CKNW provided some of the background to the legal moves of today, offering up some of the text of the legal notice of Civil Claim,  filed with the Supreme Court of British Columbia. 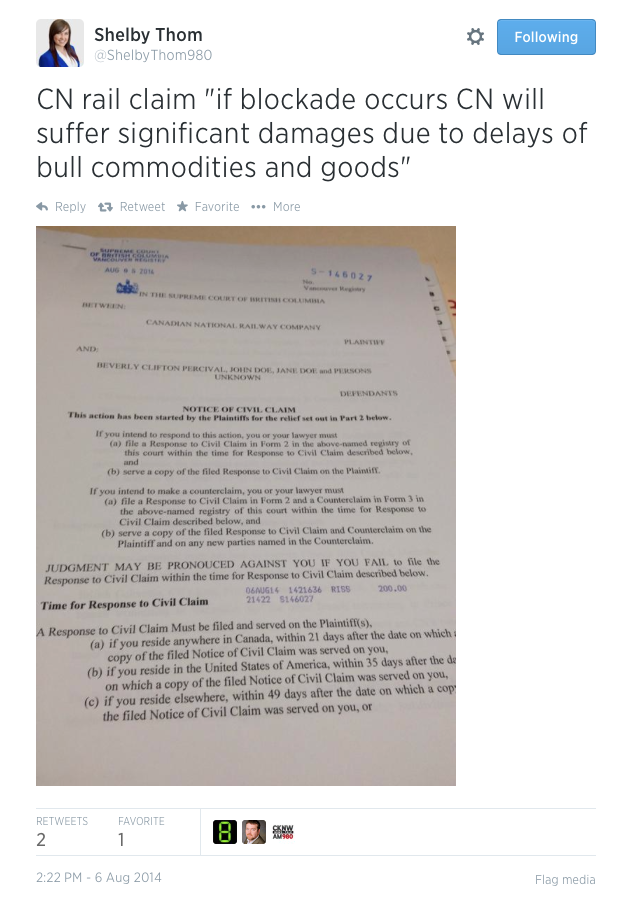 The railway is looking to have the Court grant an "interim, interlocutory and permanent injunction" against any blockade that the Gitxsan Nation may have planned  on the main line of the Northern CN Route.

A full review of many of the items of note from the affidavit from CN Rail against the Gitxsan can be found from CKNW Report Shelby Thom's twitter feed.

According to the CKNW Reporter, CN representatives continue to be involved in discussions with the Gitxsan, but the railway would seem to still have concerns over any potential impact on rail operations.

Items of note on the Court moves of today and events beyond can be found below:

Some further background on today's events in the Gitxsan Territory can be found here.

Email ThisBlogThis!Share to TwitterShare to FacebookShare to Pinterest
Labels: CN to seek relief of Gitxsan blockade prospects from Supreme Court