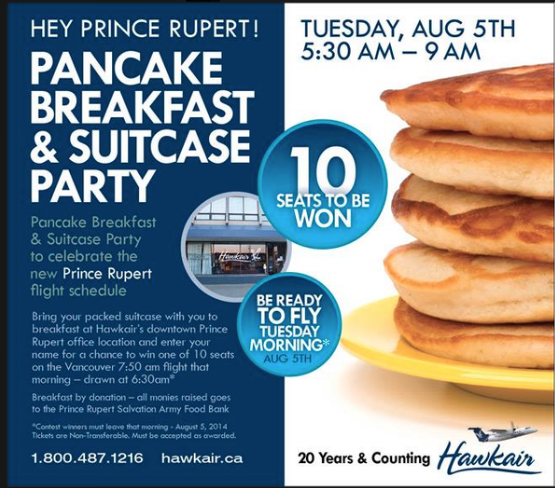 It could be a rewarding experience to wake up early and head down to the Hawk Air office on Tuesday morning.

As part of the launch of the airline's new schedule featuring an early morning flight to Vancouver, Hawkair is hosting a Suitcase Party on Tuesday, August 5th.

Providing the opportunity for ten North Coast residents to win a free flight to the Lower Mainland.

The first notice of the special event was sent out through the Hawkair twitter feed and Facebook page over the weekend, offering up the details of the Pancake Breakfast from 5:30-9:00 AM.

Those interested in the prospect of a free flight should bring a packed suitcase to the event at the Hawkair office in the Highliner Inn, prior to the 6:30 draw time.

At that time, Hawkair will make the draw giving those that have entered the draw a chance to win one of 10 seats on the 7:50 flight to Vancouver on Tuesday morning.

Contest winners must be willing to travel on that flight and the tickets are non-transferable.

In addition to the chance to score a trip to Vancouver, the Hawkair staff will be serving up a pancake breakfast, with any donations received from the event directed towards the Prince Rupert Salvation Army Food Bank.

You can also learn more about the Tuesday launch from the Hawkair website.