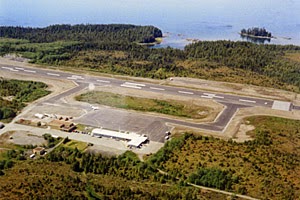 As we outlined on the blog yesterday, Hawkair is celebrating the launch their new early morning flight schedule today, with the first bus to the airport heading out earlier this morning for the 7:50 flight.

And as a photo posted to Hawkair President Jay Dilley's twitter feed shows, the promotion for today's debut flight proved to be a fairly successful event, with a large group looking to score the one of ten free flights to be awarded this morning. 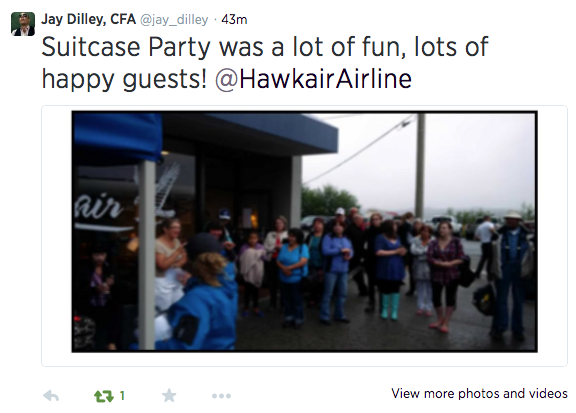 And as Hawkair celebrated the new schedule with this mornings suitcase party and pancake breakfast, for YPR, the good news on improving flight connections may soon continue.

Once again, the prospect of a new entry looking to provide air service to Prince Rupert is proving to be a popular topic for a Vancouver based air service.

An article over the weekend in the Globe and Mail provides a hopeful note for those on the North Coast that remember the halcyon days of Jet Service out of the Digby Island airport.

With Canada Jetlines continuing to work on their financial plan, which could lead to the launch of more competition on under served routes across Canada.

Brent Jang, outlines the prospects of a jet connection between YPR and YVR, one which would see the cost of air travel drop significantly and perhaps launch a bit of a price skirmish that will provide some financial benefits for local travellers.

The key aspect of the article ( which you can read here ) is the proposed price point for travel, which according to the Globe would be as little as 87 dollars one way, which is calculated out as a 67 per cent saving from the current rate of air travel.

One way that they may provide for cost effectiveness, is a plan to possibly fly out of Abbotsford instead of Vancouver, a decision which might not find widespread acceptance for North Coast travellers who are used to being delivered to the YVR terminal.

The Canada Jetlines blueprint suggests that the proposed airline would make use of Jets that are less than a decade old, their first purchases to be a pair of Airbus 319 jets by the spring of 2015 with expansion plans to follow.

Airline executives hope to have the airline up and running by mid 2015, though they have not identified where they would launch their service, or which markets would be serviced first should they move forward with their investment plans and take to the skies.

That mid 2015 timeline is already a slight change from when we first outlined the ambitious plans for Canada Jetlines in November of 2013, which suggested a late 2014 start up, you can review that item here.

For more on developments in air travel options for the Northwest see our archive page here.