As number of encounters grow, City of Prince Rupert joins in on chorus of wolf warnings 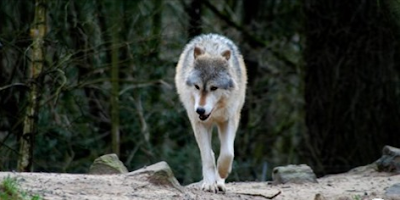 The accounts of wolf encounters appear to be growing, something we noted earlier this month after a stream of Social media posts highlighted the annual Spring time interaction between humans (and their pets) and wildlife, in this case wolves.

Yesterday, the City of Prince Rupert took note of some of that concern, posting a short message to their Facebook page, reminding residents of the natural setting we live in and how it makes for a habitat for wildlife and with it the prospect of encounters.

In recent weeks the Prince Rupert RCMP detachment has been the recipient of phone calls on the issue and Conservation Service Officers have also been called towards addressing the issue.

Yesterday, the BC Conservation Officer Service posted a message on Social Media to warn the public of the increase in wolf activity in the City, noting of the volume of reports on attacks on dogs and cats while observing that the majority of the sightings have been at night and in the early mornings.

As the Conservation Officers note the most often location for interaction that of the golf course or near the BC Ferry Terminal. 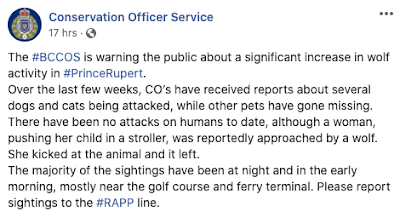 In the past they have also noted that residents have a role to play in safeguarding their pets and property, with keeping pets on leashes, avoiding trail areas while walking with them and ensuring that your property does not provide for attractants for any form of wildlife. 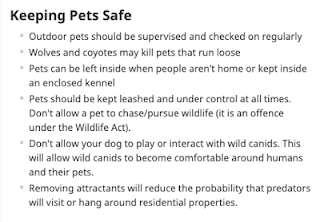 You can learn more about the Conservation Officer service here.

For more notes on the work of Emergency Service providers in the region see our archive page here.

Email ThisBlogThis!Share to TwitterShare to FacebookShare to Pinterest
Labels: More encounters with wolves in Prince Rupert