It would appear that the City of Prince Rupert is preparing to spend some of the capital funding monies that have been delivered by the province in recent years, with a new Request for Proposal posted to the BC Bid website making note of a program the city is calling "The Projects".

While there has been no detailed roll out through City Council of the planning underway, the call for submissions does indicate a fairly expansive rebuild of civic infrastructure is on the mind of the council members, though the the extensive work ahead would seem to provide for challenges that will require outside experience and assistance.

The Call for Bids makes note of the city's limited capacity to oversee and manage the large scale of work ahead.

Towards that, they are looking for someone to oversee the ambitious scale of work they have in mind and to handle the day to day management of the programs as they get underway.

In the Invitation to Bid from Friday, the City outlines some of the scope of their ambitions for the work, with the successful bidder to lead and manage the program to achieve the city's objectives.

The City is planning over the next several years to implement a large capital works plan for the construction of multiple facilities and infrastructure engineering projects including buildings, facilities, storm drainage, roads, water supply and sewer treatment (collectively, the “Projects”).

The City has limited capacity to oversee and manage the Project internally. The City is seeking proposals from qualified firms to provide the services of an owner’s representative who will act as the City’s representative in delivering selected Projects.

The City has formulated the terms and procedures set out in this RFP to ensure that it receives proposals through an open, competitive process, and to ensure that the Proponents receive fair and equitable treatment in the solicitation, receipt and evaluation of their proposals. The City is responsible for delivery of the Projects. 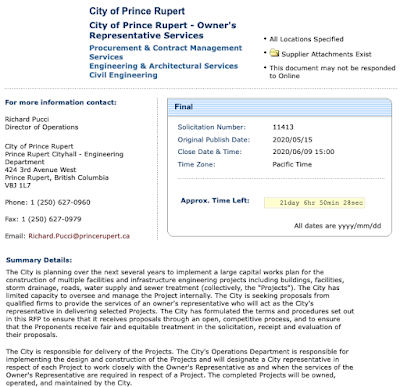 There is no comprehensive list published as of yet as to what those projects are, or what kind of timeline they will be worked on under; with the current bid request that mainly of finding someone to act at the "Owner's Representative" in the large scale management of the extensive work ahead.

The Project management process will include General Oversight, Procurement, Design and Construction and Post Construction requirements

In addition to a lengthy list of General Responsibilities, the Owner's Representative will be involved in the Design Phase and General Contractor procurement process when the time comes to move forward on each of the elements of "The Project".

When it Comes to the Specific Assignments for the work of the successful proponent the City has some additional notes of interest for applicants.

The actual amount of work required is not currently known and the City makes no representations or warranties as to the minimum or set number of Projects for which the Owner's Representative will be required to provide the Services.

It is envisioned that, depending upon the specific nature and requirements of a Project, the Services will be delivered on a 'time and materials' basis using the hourly rates provided by the selected Owner's Representative.

You can review the full outline of the expectations for the successful candidate, as well as the documentation that goes with the call for bids from the BC Bid website.

Once an Owner's representative has been selected, the term of the contract is for three years from the date of commencement, with an option to extend the contract for two additional terms of one year each.

The City's Director of Operations Richard Pucci is the person on point for the City on the call, the deadline for submissions is June 9th.

More notes related to past City Requests for Proposals and successful bids can be found from our archive page here.

The City of Prince Rupert has received two rounds of funding from the Provincial Government in the last two years designed to assist in capital projects and infrastructure, the most recent announcement for the funding came one week ago, when the city received a 6.5 million dollar share of the 75 million dollars that were distributed across Northern BC.

The City also receives federal/provincial funding for a range of large scale projects such as the current water supply program underway.

Further notes on City Council themes can be explored from our Council Discussion archive.
Posted by . at 9:14 AM

Email ThisBlogThis!Share to TwitterShare to FacebookShare to Pinterest
Labels: City of Prince Rupert looks to move forward on capital spending and infrastructure plans