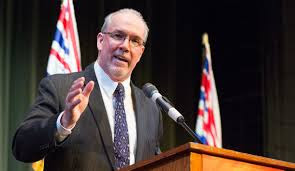 In an announcement today to highlight 75 million dollars from two programs, Premier John Horgan and  Minister of Municipal Affairs and Housing Selina Robinson spoke to building a partnership with northern communities and making investment jobs and services for the entire region.

“Northern B.C. is rich in natural resources, but its strongest asset is its people. We are proud to work in partnership with northern communities on resource development projects. These funds will help address the social and infrastructure needs that arise out of the many exciting economic developments underway in those communities. We are investing in northern jobs, roads and public services –and most importantly in northern people.” 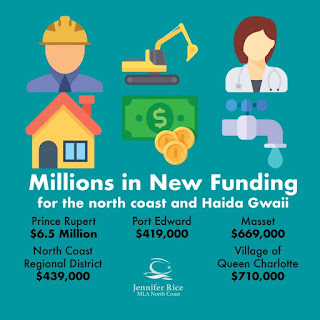 Having lived in Prince Rupert for nearly 20 years, I know first-hand the need for better infrastructure, like housing, water treatment and paved roads. With rapidly expanding Port development, and a growing community the need for improved services people count on like health and child care in the Northwest is critical.

That’s why I’m so proud to be a part of a government that invests in the future our region. This investment comes at a critical time for communities, which are struggling from the impact of the COVID-19 pandemic.

As we begin renewing BC’s economy in the wake of COVID-19, this funding will help improve services, infrastructure, and job opportunities for people in the Northwest, and ensure we can meet the needs of growing communities like Prince Rupert.

In addition to the 50 Million Capital and Planning money, another 25 million will be made available to communities as they prepare for major economic development, that funding to come through the BC Northern Healthy Communities Fund, the distribution of which will be handled by Northern Development Initiative Trust.

That fund will be available to local governments, First Nations and non-profits in the region to support local delivery of critical services, such as health and mental health care, housing and child care.

The 2020 funding follows similar funding that was released by the province in 2019, when 100 million dollars was distributed to communities of the North through the Northern Capital and Planning Grant.

Prince Rupert received 8 million dollars from the 2019 announcement of February, something which earned MLA Rice a shout out from a former Prince Rupert Mayor.

Current Prince Rupert Mayor Lee Brain outlined how pleased he was at word of the funding from today.

“Accessing a share of local revenues to help support our critical infrastructure needs is essential for our communities to keep pace with development. We are pleased to see the Province making this financial commitment, especially in a time when our communities are seeing revenue losses related to COVID-19.”

More notes from Mr. Brain can be found on his Facebook stream.

Premier Horgan observed today that the funding is part of ongoing dialogue between the Province and British Columbia's Northwest and North Central Communities.

As part of the roll out of today's announcement, Minister Robinson paid tribute to the hard work of the North Coast MLA in advocating for communities in the north, highlighting the needs that each has at this time.

Further notes on the Provincial funding announcement can be reviewed here.

For more notes on items of interest out of Victoria see our archive page here.
Posted by . at 8:25 AM

Email ThisBlogThis!Share to TwitterShare to FacebookShare to Pinterest
Labels: Provincial funding for Northern BC communities