The labour troubles at Canada Post have for the most part run under the radar through the summer, the early days of a prospect of either a lock out or strike seemingly given over to a slow march of discussion, seemingly with little in the way of progress.

To try and spur those discussions along, CUPW the union representing the workers has issued an Open Letter to the Prime Minister, reminding Justin Trudeau of some elements of his election campaign and his theme when it came to postal services across the country, noting now now is the time for the Liberal government to provide some direction to Canada Post's negotiating team.

You can review the full letter here.

To further explain their position, CUPW made much use of social media over the weekend, highlighting their desire to see serious negotiations move forward sooner rather than later. 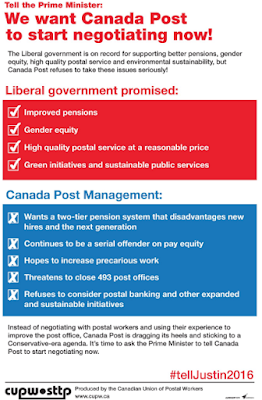 With only a few weeks left until the end of the summer, many observers expect the negotiation process to heat up once again as the Labour Day weekend gets closer.

From their notes on the weekend, CUPW appears ready to continue to put pressure on the Federal Government to send some signals to Canada Post negotiators to get moving when it comes to progress at the negotiation table.

More background on labour issues of the Northwest can be found on our archive page.