With Canada's 150th Birthday approaching for 2017, the federal government is looking for unique ways to celebrate and one plan now in motion is to have Canadians recommend potential sites for nomination to the United Nations World Heritage Lists.

The call for nominations was issued on Monday by Environment Minister Catherine McKenna, with the six month consultation period with Canadians to end on January 27th of 2017.

“The designation as a UNESCO World Heritage Site is reserved for humanity’s most outstanding achievements and nature’s most inspiring creations. This is an opportunity for all Canadians to think about the natural, historic and cultural wonders in their communities. As we prepare to come together as a nation to celebrate our 150th birthday in 2017, I invite Canadians and communities from across the country to nominate their unique and exceptional places for consideration as future World Heritage Sites, so we can share more of our treasures with the world.” -- The Honourable Catherine McKenna Minister of Environment and Climate Change and Minister responsible for Parks Canada

Monday's announcement marks the first time in over a decade that the Federal Government has put out the call for nominations to add to the tentative list of Canadian sites for consideration.

British Columbia has one location already included in the world's protected Heritage list, with UNESCO having given designation to SGang Gwaay in 1981, commemorating the living culture of the Haida people and their relationship to the land and sea.

One other Haida Gwaii location is on the short list for tentative nomination, with Gwaii Haanas currently working its way through the various reviews towards a possible final designation.

The National Park Reserve and Haida Heritage site was nominated in 2004 for inclusion on the UNESCO list and is one of six locations across Canada currently under consideration as part of the lengthy process in place with the United Nations body.

To date, Canada currently has eighteen properties included in the World Heritage List eight of them cultural sites, ten of then natural. 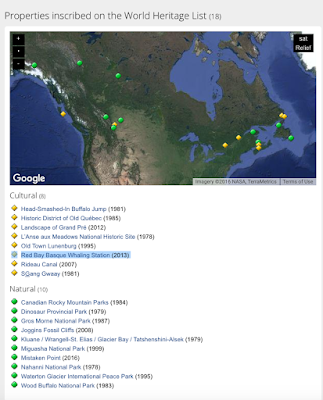 In  2013 Port Edward's North Pacific Cannery Historical Site made an attempt to join the list of potential Canadian sites for the list, we traced those early steps with this item from September of that year.

There is no shortage of other potential nomination sites to be found around the Northwest for inclusion in the Federal government's nomination process. However submitting an application does require a bit of homework from anyone looking to suggest a favourite location.

The criteria and Requirements for inclusion on the World Heritage List features a fairly stringent collection of key areas for consideration.

More background on Monday's announcement can be found here.

A complete overview of the nomination process can be found from the Parks Canada website, with the details on how to submit a site available for review here.

You can review some of our notes on exploring the North Coast and some of the tourism options in the region from our archive page here.