This week's Regional Council session will find District Directors discussing some concerns that the planning for the proposed Aurora LNG Terminal for the south end of Digby Island may have strayed into an area of the Dodge Cove Official Community Plan.

In July, Regional District forwarded a letter to Aurora officials noting that the SQCRD is of the understanding that a portion of the current Aurora project footprint encroaches into Dodge Cove's Official Community plan boundary.

The letter to Aurora notes that as currently proposed, a portion of the Aurora LNG project footprint is in close proximity to the Dodge Cove community watershed, considered an environmentally sensitive area.

The correspondence with Aurora observes  that the LNG proponent is required to make an application to the Regional District for an amendment to the OCP to accommodate the proposed change of land use.

You can review the full letter to Aurora below: 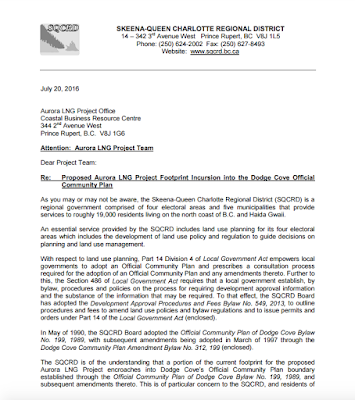 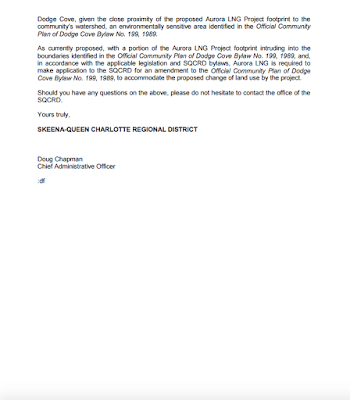 The prospect of LNG development on Digby Island has been something that has been of particular concern for Regional District Director Des Nobels, who represents the area on the Regional government body and has often raised issues of note related to the proposed development.

A local group, Friends of Digby Island has created a Facebook page to put forward their opposition towards the large scale industrial project.

Regional District meets this week on August 12th, with the topic of the proposed Aurora LNG project one of the items up for discussion on the Agenda for the meeting.

More background on the proposed Digby Island LNG terminal can be found here.

Past items of note from Regional District can be found on our archive page here.