Power was interrupted on the North Coast for roughly thirty five minutes on Friday afternoon, as a lightning storm in the eastern regions of the Northwest caused a transmission failure for much of the Northwest grid. 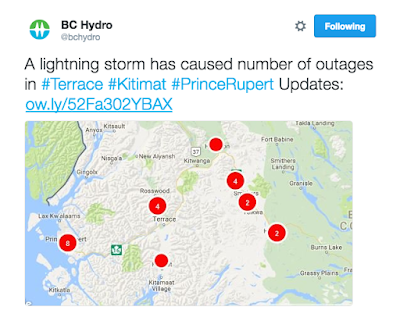 The power interruption started at 3:30 PM give those Rupertites who could, opportunity to get outside and enjoy the Sunshine and warm temperatures of a North Coast afternoon. The brief break from the usual daytime routine came to an end when the power was returned at 4:05 PM

An advisory posted to the British Columbia Hydro website noted that close to 50,000 customers of the Northwest were affected by Friday's power outage.

Environment Canada had previously issued a Severe Thunderstorm Watch for the Bulkley Valley Lakes Region of the Northwest noting that conditions were favourable for strong winds, damaging hail and heavy rain in addition to the Thunder and Lightning.

Updates to the Power outage lists can be found on the BC Hydro website.

As the storm rolled across the Bulkley Valley and into the Central Interior more reports on the Northwest wide power outage began to be delivered.

Temporary Power Outage Leaves 50,000 BC Hydro Customers in the Dark
Power restored in most of Northwestern B.C.
Mass Power outages in Bulkely Valley

Past items related to power outages in the Northwest can be found on our archive page.
Posted by . at 4:30 PM