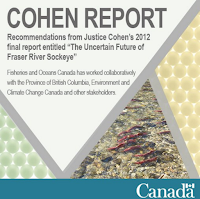 There's been no indication yet from Prince Rupert City Council if Federal Fisheries Minister Dominic Leblanc has accepted their invitation to come to Prince Rupert to discuss issues related to the North Coast fishery, but the status of Wild Salmon and other Pacific fishery items were on his agenda on Tuesday.

The Federal Fisheries Minister hosted an information session in Vancouver yesterday outlining the steps the Federal Government has taken when it comes to the Cohen Report on the Salmon Fishery from 2012.

During the course of a media briefing, Minister Leblanc noted that Federal Government has already implemented over thirty percent of the 75 recommendations that it is responsible for and is working in collaboration with the Government of British Columbia, and the Federal Ministry of Environment and Climate Change to address the recommendations.

“We value the work done by Justice Cohen and the Commission and we will continue to act on their recommendations in our efforts to support the conservation and sustainability of Pacific salmon. We also look forward to consulting with Indigenous groups, other partners, and stakeholders on the Wild Salmon Policy Implementation Plan as we continue our efforts to ensure the future of this vital resource.” -- The Honourable Dominic LeBlanc, Minister of Fisheries, Oceans and the Canadian Coast Guard

A review of the 75 recommendations can be found from this Update on Cohen Commission Report released by the Department of Fisheries. From the updated list above, the Federal Government observed that it  has implemented in whole or in part the following Recommendations:

Further items of note from the Tuesday information session can be examined here.

The Minister also observed the the Federal government is committed to the conservation of all Wild Pacific Salmon, adding that DFO would soon be commencing with consultations with Indigenous groups and stakeholders on the implementation of a Wild Salmon Policy in the Fall of this year. 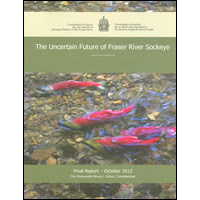 The Cohen Report, was released in November of 2012 following three years of consultations that heard a range of testimony on the state of the fishery in British Columbia, focused on the collapse of the Fraser River Salmon Fishery in 2009.

Our original blog item at the time of the release of the Cohen Report can be reviewed here.

The timing of Minister Leblanc's observations on Tuesday came as more reports of dire returns for the Fraser River fishery were being released.

Some background news items related to the Federal Minister's  announcements can be found below:

More background on notes related to the North Coast fishery can be found on our archive page.
Posted by . at 9:34 AM

Email ThisBlogThis!Share to TwitterShare to FacebookShare to Pinterest
Labels: DFO to implement number of Cohen Report recommendations from 2012 overview