A September storm is a brewin' 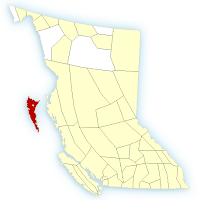 The first significant windstorm of the near fall has appeared on the Environment Canada radar screens, with an advisory for Haida Gwaii issued this morning.

The weather alert was issued at 4:27 AM and advises residents of Haida Gwaii that winds will rise to southeast 70 to 100 km/h overnight.

The weather system will hit Haida Gwaii after midnight and continue into Thursday evening as the front moves eastward at a rather slow pace.

The arrival of strong winds heralds the changeover from summer to fall, making this system the first of the always busy Fall storm season for Haida Gwaii and the North Coast.

The forecast for the North Coast for Wednesday night is calling for periods of rain overnight, with winds from the southeast at 40 to 60 km/h, rising to 80 over exposed coastal sections. The rain and wind will continue on into Thursday.

Should there be any further weather alert issued for the North Coast we will update the blog as conditions warrant.